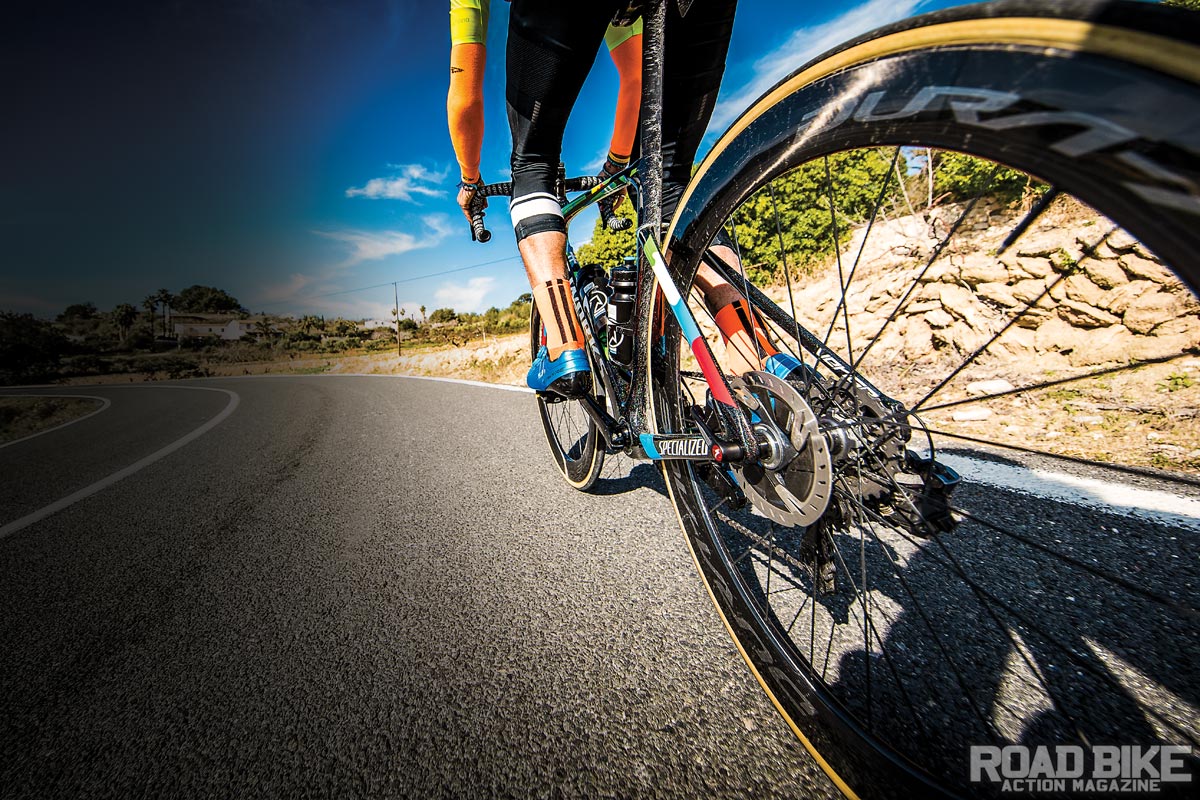 Editor’s note: Of course by now the cycling world is still humming over the arrival of Shimano’s new 12-speed  Di2 Ultegra and Dura-Ace drivetrains.  Just for the sake of popular memory, we thought to  head back in time for a Shimano Di2 prequel from 2017 when Shimano had a press camp in Spain to highlight the latest iteration of the electronic drivetrain.

My how time flies when you’re having fun. As I sat down with Shimano North American product manager Dave Lawrence at their recent product launch in Calpe, Spain, to talk about their latest rendition of the high-end electronic drivetrain, we recalled how, although it seemed just like yesterday, we last gathered in San Diego, California, for the launch of their first Dura-Ace Di2 drivetrain. In real time, it had actually been four years. 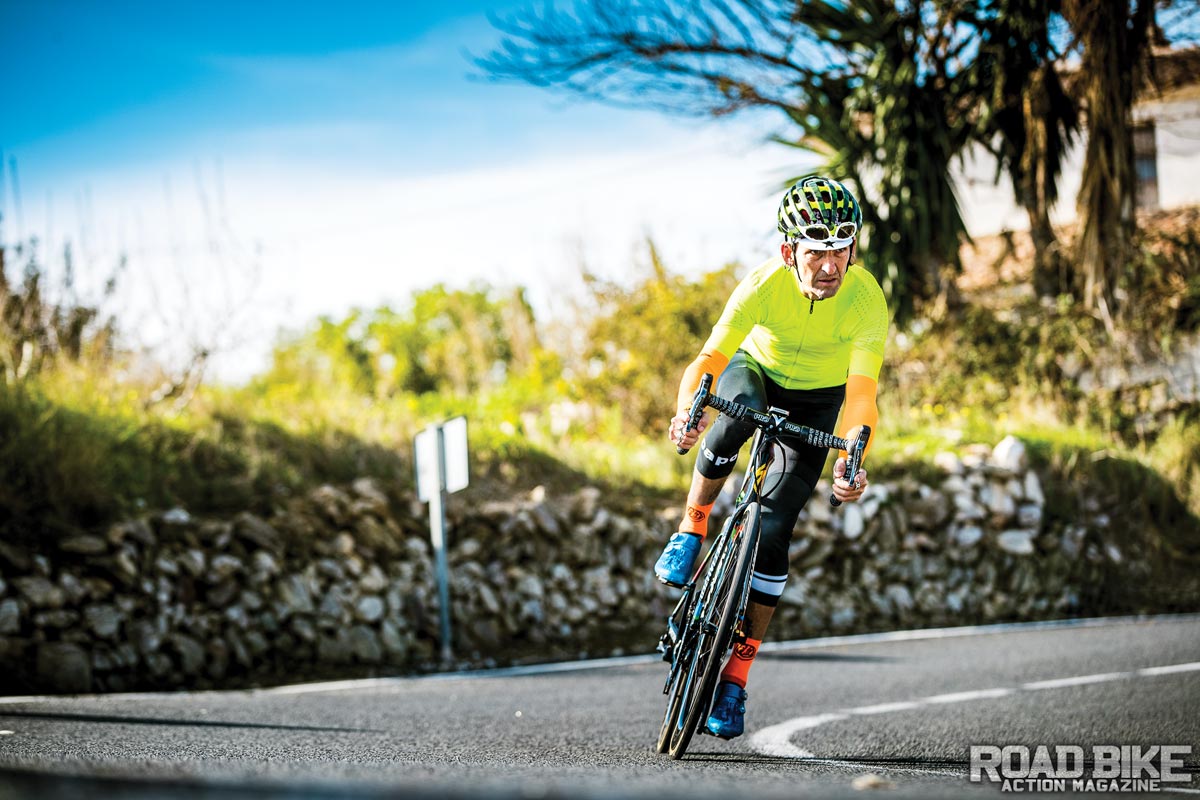 And despite the massive overhaul in both the performance and features of the component kit, let’s dispel one widely circulated rumor right away—in bringing the new parts to market, the system is not wireless. While not discounting the possibility of a future wireless system, Dave reminded the group, “Wireless doesn’t do anything to change the riding experience. Our goal is to always understand how and why people ride their bikes and how to best facilitate that. With Di2, we wanted to make a difference there, and the capacity to customize your drivetrain is more significant than wireless.”

But what the new Dura-Ace 9150 (Di2 with caliper brakes) and 9170 (Di2 with hydro disc brakes) groups lack in
having fewer wires, they instead aim to multiply their benefit features in one key way—connectivity. As we all know, the world of consumer electronics and digital communication is evolving at a faster pace than most of us can keep up with. And as the realm of smartphone technology continues to prove smarter than the humans who rely on them, so, too, does the new Di2 drivetrain.

As always, Shimano was proud to speak to the eight UCI WorldTour teams they sponsor, and how riders throughout are all part of an official and unofficial R&D test group. 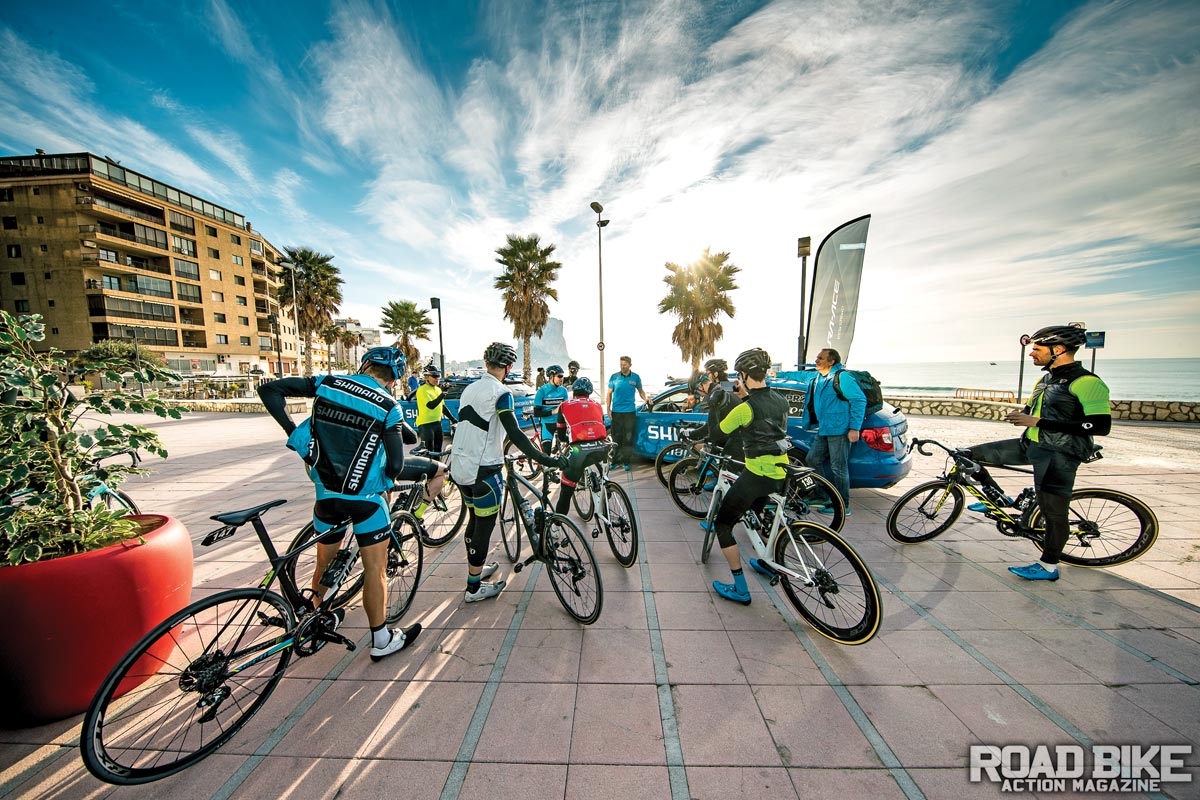 More than just new derailleurs and shifters, Shimano gathered over 25 journalists in two different camps to showcase a wide range of products. In addition to the drivetrain parts, they also rolled out new carbon wheels, a new disc and caliper brake, a new version of their sport camera, and the latest in their evolving S-Phyre clothing and footwear range.

The Hollowtech 2 crank has a new look but maintains the four-arm design while shedding 7 grams. Available in seven lengths (160–180mm). one key difference is the new tooth profile and position of the inner chainring, which is intended to work better with shorter chainstays and provide better cross-chain performance.

Shimano took pity on riders less inclined to push tall gears uphill and granted us the favor of a new 30t rear cog. Five of the rear gears are titanium.

Prior to the launch, one of the first things we heard about the new Di2 shifters was that they would now have more “feel” to each shift being made. Apparently, one riff against the previous Di2 shifters was that you could never really be sure if you made a shift or not. Although it took some added concentration when riding to feel (and even hear) each shift made, there is a definite tactile difference—although nowhere near the level of Campagnolo.

In addition to the usual lever shifters, there are two buttons located underneath the top of the brake hoods that,
in addition to changing computer functions, can now make shifts and operate the camera. The shifting feature came at the behest of Team Sky and is a very innovative and useful addition.

“With full Synchro, you can expect the auto-shift function to change both front and rear gears based on the derailleur’s interpretation of your pedaling cadence.”

If there was one noteworthy change in the evolution of the Dura-Ace drivetrain, it would be the road group’s move to a trio of shift systems that mirror the design of their high-end XTR mountain bike drivetrains. In addition to the usual manual mode, there are now three additional shift modes possible: semi-Synchro, full Synchro and a customizable Synchro, with all three offering distinctive auto-shift capabilities. 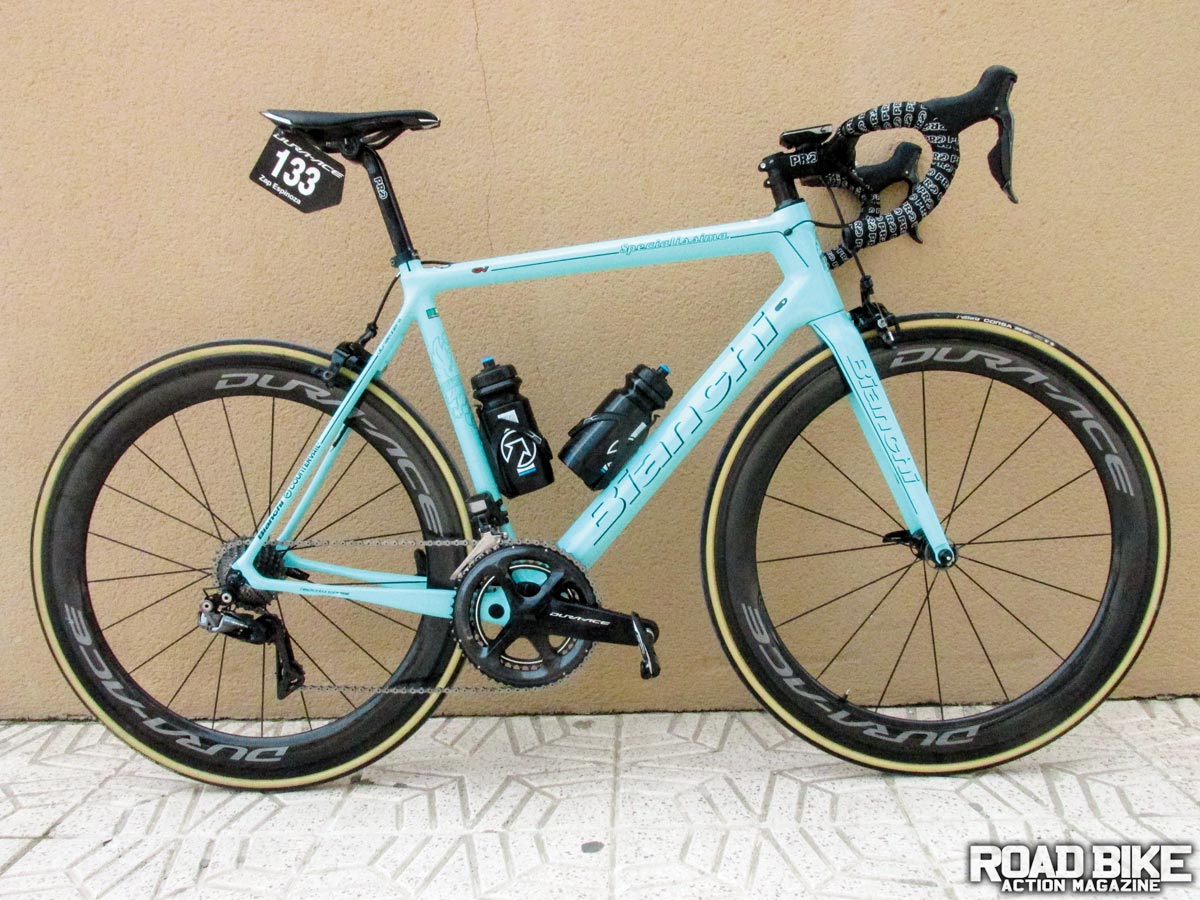 While the front derailleur remains largely unchanged, the rear derailleur has been redesigned with a “shadow” profile (already seen in their XTR mountain bike derailleur), which provides a safer, more inboard position.

Both the dual-pivot and direct-mount rim brakes have been redesigned to accommodate 28mm tires and now use a booster plate for increased stopping power. 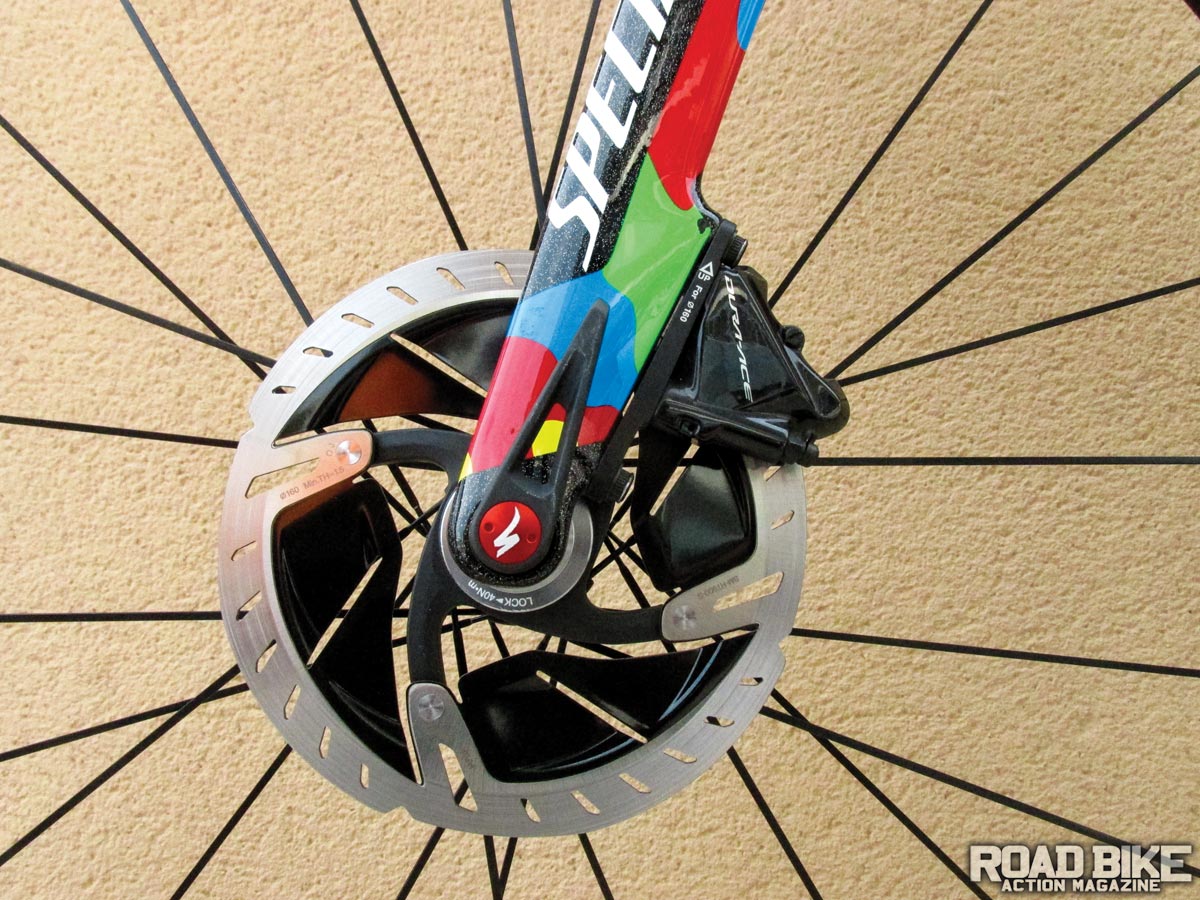 The much-cleaner, flat-mount design now carries the day with rotor sizes remaining at 140mm and 160mm sizes. Unlike SRAM, Shimano does not require a front 160/rear 140 rotor size combo, but they do recommend it for maximum braking power. As we pressed for official approval to run the more aesthetically pleasing 140 front and rear combo, Dave Lawrence said we could with the proviso that their R&D tests showed that running 140mm rotors provides braking power akin to caliper rim brakes. While that may be the result in lab tests, in overall conditions, the disc brakes simply offer superior performance in terms of modulation and late-braking capabilities.

The smart-looking rotors are in accordance with UCI regulations, which mandate a rotor edge of less than a 90-degree angle. Shimano said that the new calipers provide increased aero efficiency.

A key design goal for Shimano was to have the hydro brake lever and hood mirror the non-hydro version in size and shape as much as possible, and in that pursuit they succeeded. The new 9170 lever has a reduced height and reach, with the latter measurement now 1cm closer to the handlebar. A big improvement, if only measured in micro-sized increments, is the ability to adjust both lever free-play and reach adjustment. Reach adjustment is always a good thing, but the free-play adjustment is especially a boon for everyone who has scoffed at the earlier inability of hydraulic brakes to provide equal brake engagement on both levers. 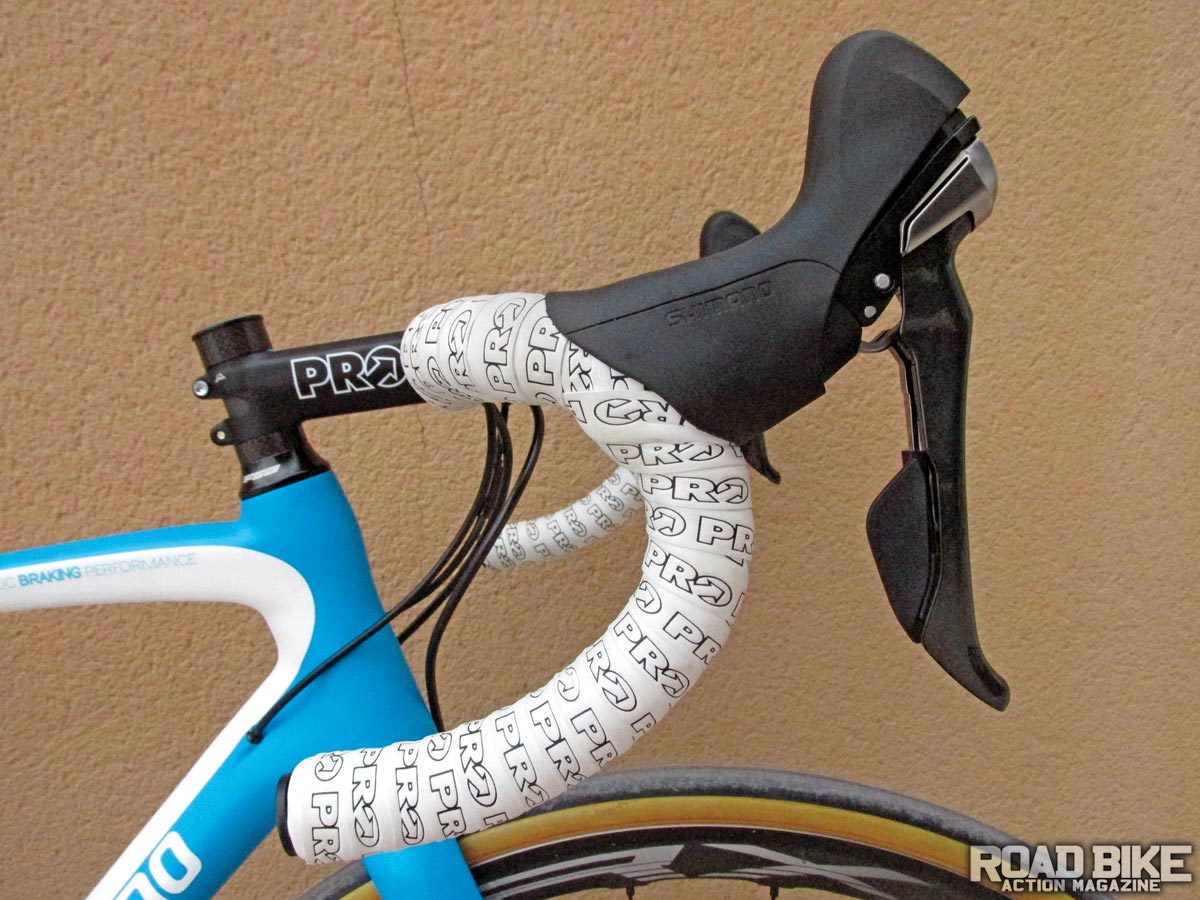 All the bikes we rode were mounted with Shimano’s latest C60 carbon hoops. The first thing I noticed about the wheels (mounted with Vittoria Corsa tires) was how smoothly they rolled. I figured that Shimano must’ve bucked the Euro tradition of over-inflating the tires before I recalled that the C60s we were riding were the tubular option.
The wheel that wasn’t on hand but was the most exciting to contemplate was the all-new disc-specific C40 carbon clincher. Due to it being a disc-specific wheel, the C40 is Shimano’s first all-carbon clincher, and it runs a 12mm thru-axle and is tubeless compatible. There’s also a rim brake/QR version as well coming later this year. The tubular wheel has a 28mm external width and works with Shimano’s thin brake pads.

There was a key moment as we sat in a conference room going over the new technology when Lawrence recalled how at the original Di2 launch four years previously it was announced that all Di2 programming could only be done with an ANT+ interface and PC computers. The audible gasp from all the Apple-bound journos in response was noteworthy.

Shimano technicians obviously heard the dispirited moan and so were happy to report that, in addition to be being Bluetooth-enabled, the new system is open to both PC and Apple computers, phones and tablets. And, the amount of drivetrain setup and personalization, both pre-ride and during a ride, that can be accomplished from a smartphone app is indeed impressive.

Besides the new carbon clincher wheels, Shimano’s entry into the power meter market will also be a few months away. There are strain gauges in both crankarms for left/right readings. The power meter is independent of the chainrings and is wired through the bottom bracket spindle. Shimano claims a 70-gram weight and 200 hours of run-time. 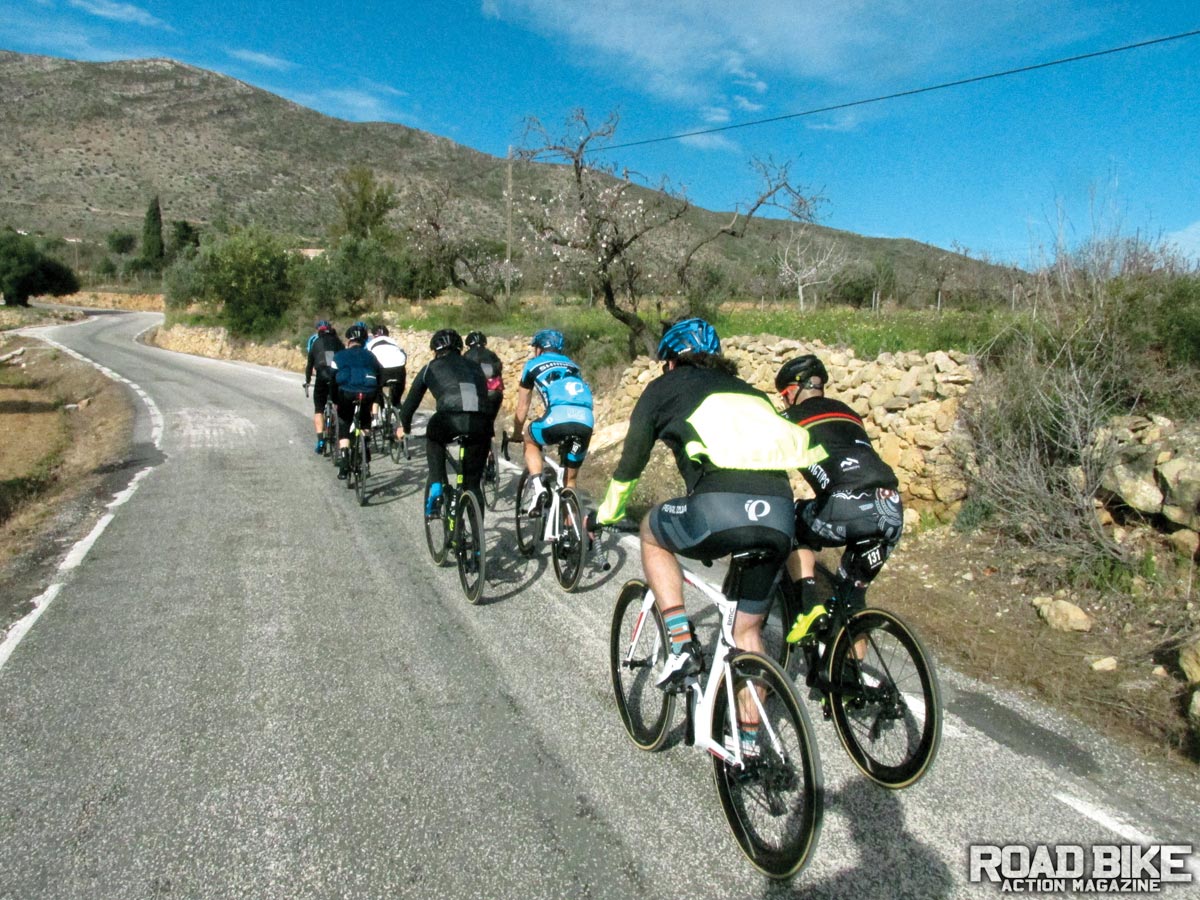 Shimano chose Calpe, Spain, for the launch because the coastal town is not only home to miles of quality roads, but is also annually relied on by many ProTour teams for their winter training camps. Besides the Etixx-Quick Step team who were staying in our hotel, we came across various pro squads out on the road.

Unlike the water-drenched camp that preceded ours, we were fortunate (and thankful) to have sunny but chilly weather to get our miles in. Shimano’s aim was to have each journo spend a day on a bike with caliper brakes and one with the hydraulic disc brakes. The first ride was a fast-paced 55-mile jaunt that included 4600 feet of elevation gain and some beautiful sweeping views of the mountains and valleys that make up the bike-friendly geography.

Aboard a Bianchi Specialissima set up with a 9150 group, I was initially reminded why the Bianchi made our short list of “Best Bikes of 2016”—light, quick and sublime! Just to get acquainted to the bike and drivetrain, I ran day one in manual mode. As expected, the Di2 drivetrain was as fast-acting and efficient as that which preceded it. It was about halfway into the three-hour ride when I remembered that a new, distinctive quality of the shifter was that it had a more tactile feel over the previous models. After some concerted effort(freewheeling and pressing my head towards the stem to listen carefully), I eventually detected the slightest of “clicks” coming from each shift.

What the 40-mile day-two ride lacked in distance, it more than made up for with an incessant pace that included some steep (18-percent pitch) climbs. My day-two bike was a Specialized Venge with the hydraulic disc brakes and the drivetrain in semi-Synchro mode, which provided 2x rear auto shifts to counter every up- or downshift I made up front. The idea behind it was to help maintain a smooth pedaling cadence, but in the limited time I was on the bike, I found it aggravating.

With full Synchro, you can expect the auto-shift function to change both front and rear gears based on the derailleur’s interpretation of your pedaling cadence. Also, with the handy phone app, you can create your own custom shifting sequence.

“As the realm of smartphone technology continues to prove smarter than the humans who rely on them, so, too, does the new Di2 drivetrain.”

When climbing one particularly steep switchback, I downshifted up front at the apex of the turn only to have the rear shift down two cogs—but wait, I didn’t want that gear! Although we could’ve easily changed the mode with a press of a button (the newly positioned junction box located in the bar end is brilliant), I stayed in the semi-Synchro mode for the rest of the ride, and when needed, just made sure to pre-shift the rear to accommodate the auto shifts to come. What made the whole exercise bearable was that, again, Shimano’s Di2 drivetrain is so ridiculously efficient and effortless.

When asked what he thought the number-one take-away of the new Di2 drivetrain was, it was interesting to hear Lawrence not mention the performance of the parts, but, instead, the performance of the various Shimano teams that brought the parts to market: “The collaboration between our U.S., European and Japanese teams was essential and, best of all, is how I think it will continue to serve not only Shimano but consumers into the future.”

Due to its outright complexity and mind-boggling options of personalization, we will definitely need more time with the new Di2 parts back home to get a better picture of how they work and whom they work best for. While
the three-day camp was definitely overwhelming with almost too much technical information, I couldn’t help but be alarmed when Lawrence closed down the launch by reminding us, “This is just the tip of the iceberg!” 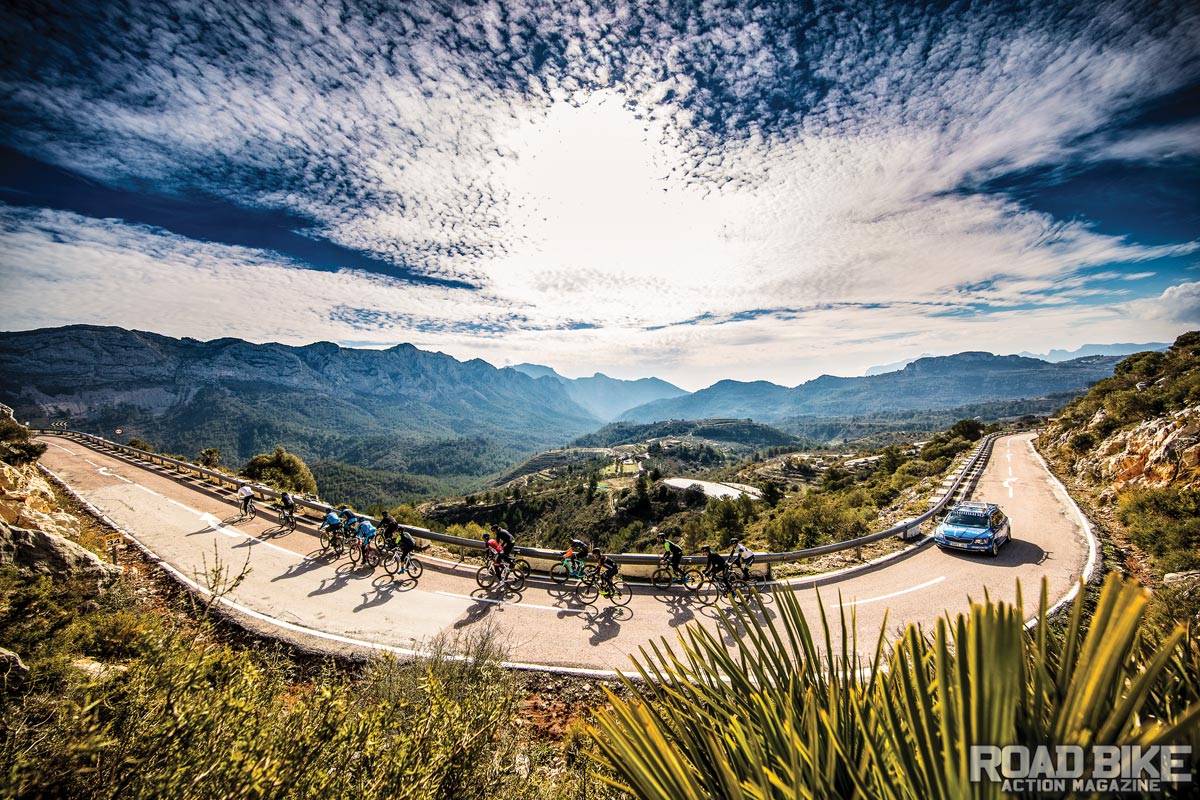