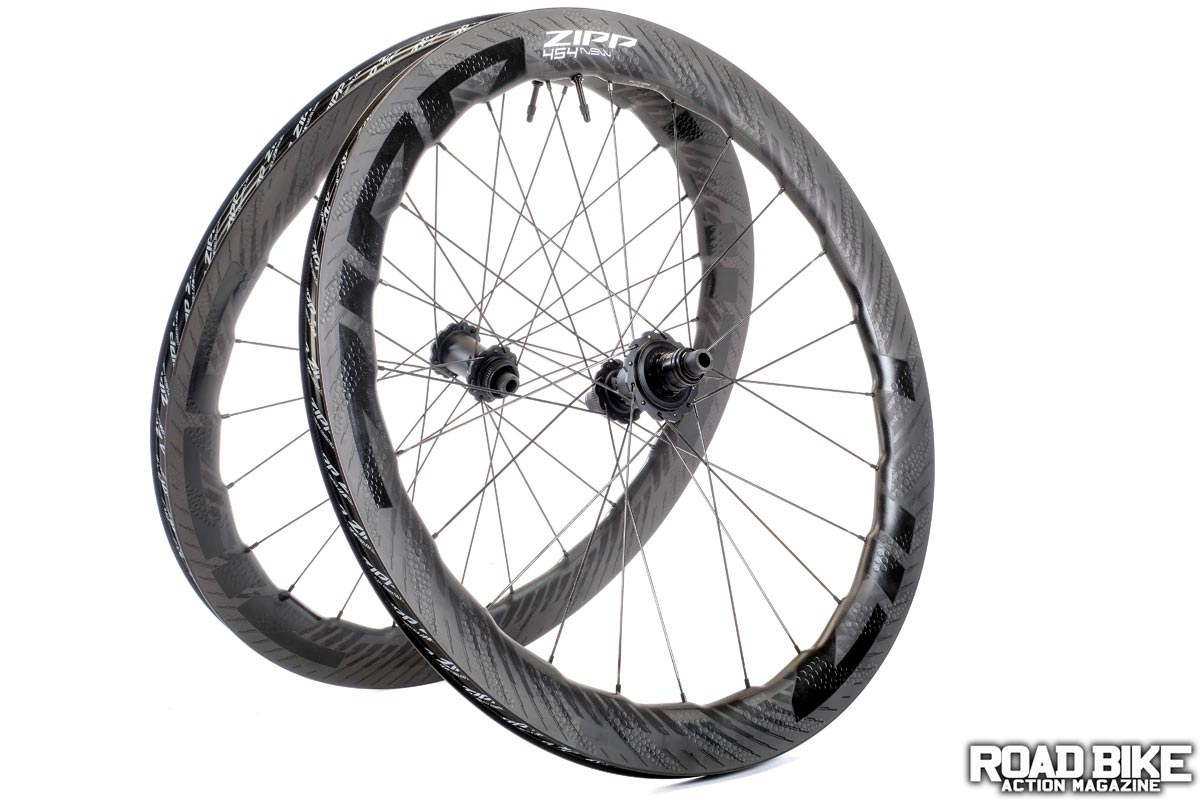 Zipp has long been a leader in aero refinement of cycling components that have relied heavily on time spent inside a wind tunnel. So, we found it striking that they have just released a new, high-end wheel that is less aerodynamic. In a call with Zipp, we were told that given its less-than-impressive tunnel results (a 1-watt gain in aero resistance) that just a few years ago this latest version of the 454 NSW wheel would never have made it to market.

But, even though it doesn’t perform as well in the tunnel as its predecessor, Zipp claims the new pinnacle 454 NSW (Nest Speed Weaponry) wheel has achieved a 12-watt advantage in actual real-world testing.

So, how is a wheel that is less aero offering better performance? Zipp has been chasing marginal gains in aerodynamics for years now, and while they have made improvements, they’ve been minimal. This time around they partnered with a few other companies to test outside the lab in real-world environments, which correlate ride quality with performance as tire and air-volume data have become better understood.

This led to a sawtooth rim profile that is significantly wider where it meets the tire and actually a bit narrower as it trails off to the spokes. The wider 28mm external width is matched to a 23mm internal width and hookless bead. This is possible because the new 454 NSW is disc brake-specific and not restricted by the constraining needs of rim brakes. The system is tubeless-specific and has a max tire pressure rating of 73 psi.

“One of the biggest advantages to the drop in rim weight meant that running the larger (and heavier) tires was less impactful dynamically than it would be on a heavier wheel.”

The most dramatic change is that Zipp’s been able to refine the carbon layup to drop over 400 grams (one pound) from the wheelset. Zipp said the weight savings came in the most important area—the rim—and that hub and spoke weights actually increased slightly. Yes, an undulating 53/58mm-deep wheelset that is 1386 grams with tubeless tape and valves is cutting edge. That amount of dynamic weight removed while maintaining aero advantage is impressive.

Zipp didn’t stop with just the rim tech, though; they also improved the hub as well. The previous NSW rear hub used a magnetic freewheel system that worked well, but was fairly complex and time-consuming to produce and service. In an effort to reduce friction while coasting, as well as simplifying production and reliability, the rear hub has a new engagement system.

For setup we opted for a 28mm tire, even though Zipp does indicate that the narrower 25mm tire is more aerodynamic. Since 73 psi is the max pressure, riders over 180–200 pounds will need to move to a 28mm tire anyway, and riders over 250–270 pounds will need to jump to 30mm tires. Zipp/SRAM does offer a great tire pressure guide online that takes into account all the variables and is a great starting point for anyone new to road tubeless.

Remember that air volume (bigger tires and wider internal rims) drastically alters the amount of pressure needed for peak performance and general riding. We have even found that the pressures they recommend are higher than what we typically run.

Tire mounting and getting the bead to seat were easy with as little as 30 psi. The only tires that we found slightly frustrating are the Continental tires we have found issues with on all other tubeless wheels and are found on many of the “not compatible” or “not recommended” tire lists that some wheel manufacturers put out. This is a clear indication that those specific tires are the issue and the wheels are not to blame. 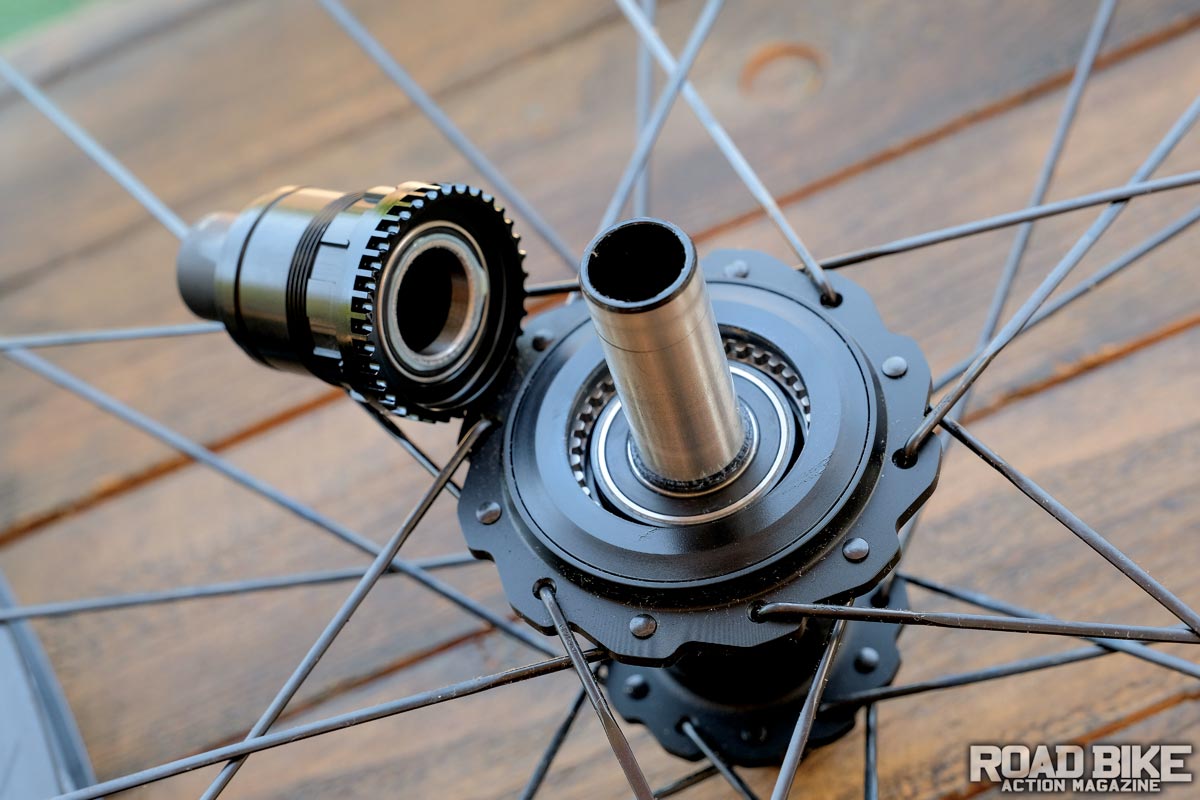 With over 1500 miles on the wheels, we definitely were able to ride everything from fast group rides to gravel roads to big mountain climbs and descents. The wheels performed without issue and handled crosswinds very well. We rode them with extra-low tire pressure and even a few with pressures near the max. In all circumstances, there was never any issue of the tire coming unseated.

One of the biggest advantages to the drop in rim weight meant that running the larger (and heavier) tires was less impactful dynamically than it would be on a heavier wheel. Is the difference noticeable? For the tall asking price, we would love to offer an emphatic yes. However, it’s subtle.

Our ride times and numbers definitely reflected a difference with many PRs and faster times at similar power and efforts along the routes we ride daily. Because the wheels are designed for 25–32mm tires, they seem to be structurally very stiff and rely on the appropriate tire pressure to deliver
the compliance.

Zipp kept mentioning the importance of “total system efficiency” and, to be honest, it was the first time that we can remember that much emphasis on it and also the first time we had heard claims from them this large. Normally, we see percentages or 1- to-1.5-watt gains touted as “revolutionary advancements,” but to see 12 watts (with all the supporting data) was impressive.

The 454 NSW is a pinnacle product with a weight that is comparable to rim profiles with half the depth while still offering greater aero benefits. As we all know, aero gains are important, but these new wheels prove that even with a slight aero sacrifice, as a system they can still deliver much larger gains as a whole.

Are the wheels worth the large price tag of $4000? Before we answer that, keep in mind that there are a variety of other wheels on the market that can match the weight, but also cost upwards of $2500 less. So, while Zipp has no doubt poured countless resources into their R&D effort, these wheels join a growing list of hyper-priced prestigious products with performance gains best ascertained by only the most discerning, cost-is-no-object cyclist.

One interesting note that Zipp did make clear was that disc brake wheels are the future, and they will not be putting any further resources into designing wheels for rim brakes. We have known this for some time, and many brands seem hesitant to say it out loud, but Zipp has clearly moved on from old-school braking.

The high price of new technology

Tubeless and disc only