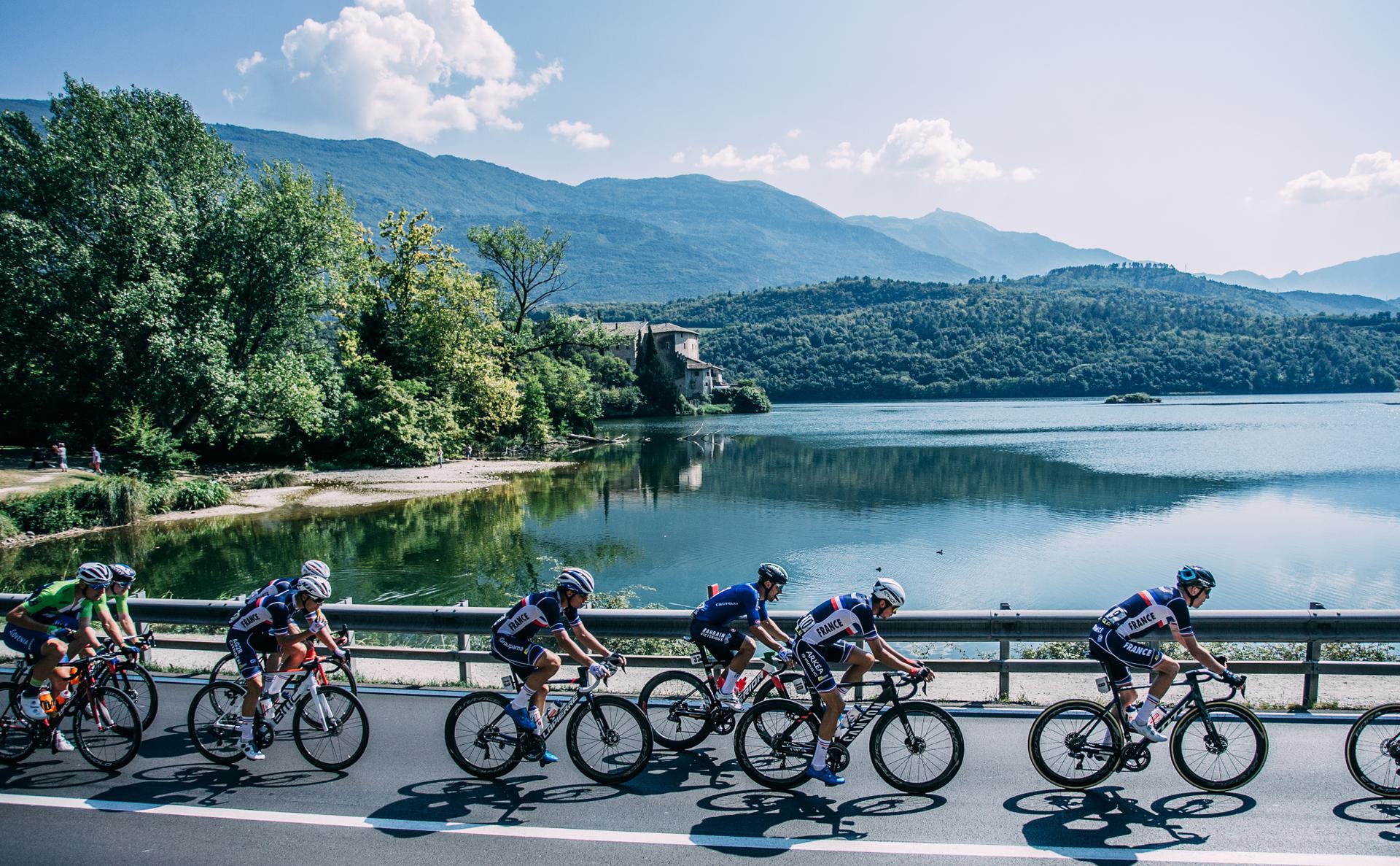 When, in 2018, began the path that would lead to the UEC Road European Championships in Trentino, it would have been daring to imagine a finale like the one that today, September 12th, 2021, the Men’s Elite Road Race gave to the people in Trento and all the fans watching from 71 Countries around the world.

The Èlite Men Race of the Road European Championships gave one of the most exciting shows of the season, with top riders to the fore since the very beginning, and ending up with a thrilling duel. 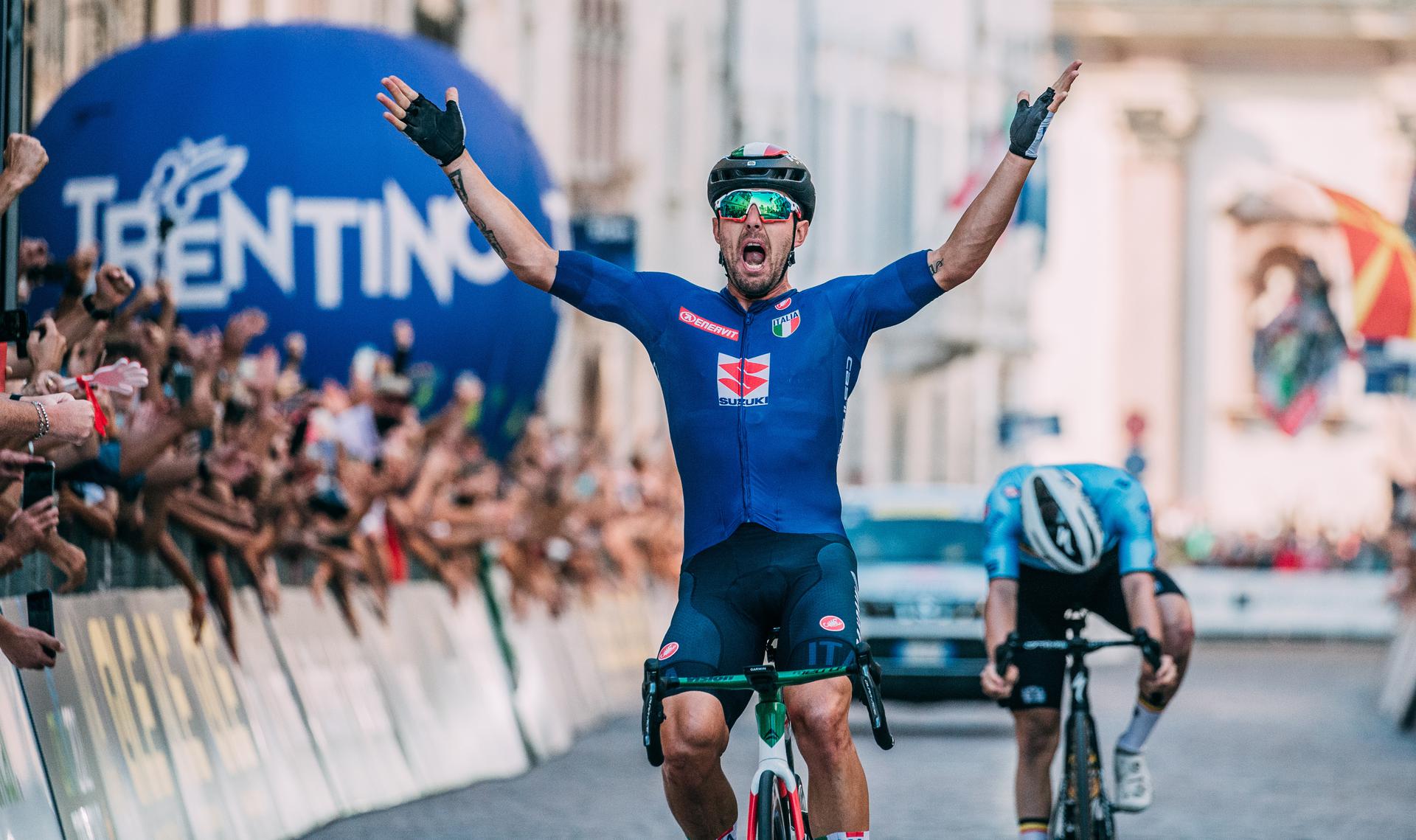 Italy’s Sonny Colbrelli won, to the joy of the big crowd Trento, but there was much more than that. There was the duel with Remco Evenepoel, the phenomenon of the future (and the present). Remco had to surrender to the Italian, in the form of his life and favored by the course, as well as by his better sprint. There was the clash of the top riders, started already on the ascents to Drena and the Monte Bondone: from Pogacar to Hirschi, from Sivakov to Pinot, from Landa to Almeida.

The bronze medal of French Benoit Cosnefroy is also worth a lot, won ahead of Matteo Trentin and Tadej Pogacar, after giving in to the top two finishers only on the last time up to Povo. It was the fourth gold medal for Italy in an extraordinary edition of the European Championships. The greatest win of Colbrelli’s career was also a great gift for team coach Davide Cassani, whose Azzurri team secured the fourth straight success in the Men’s European Road Race.

FULL-GAS BATTLE FROM THE GO 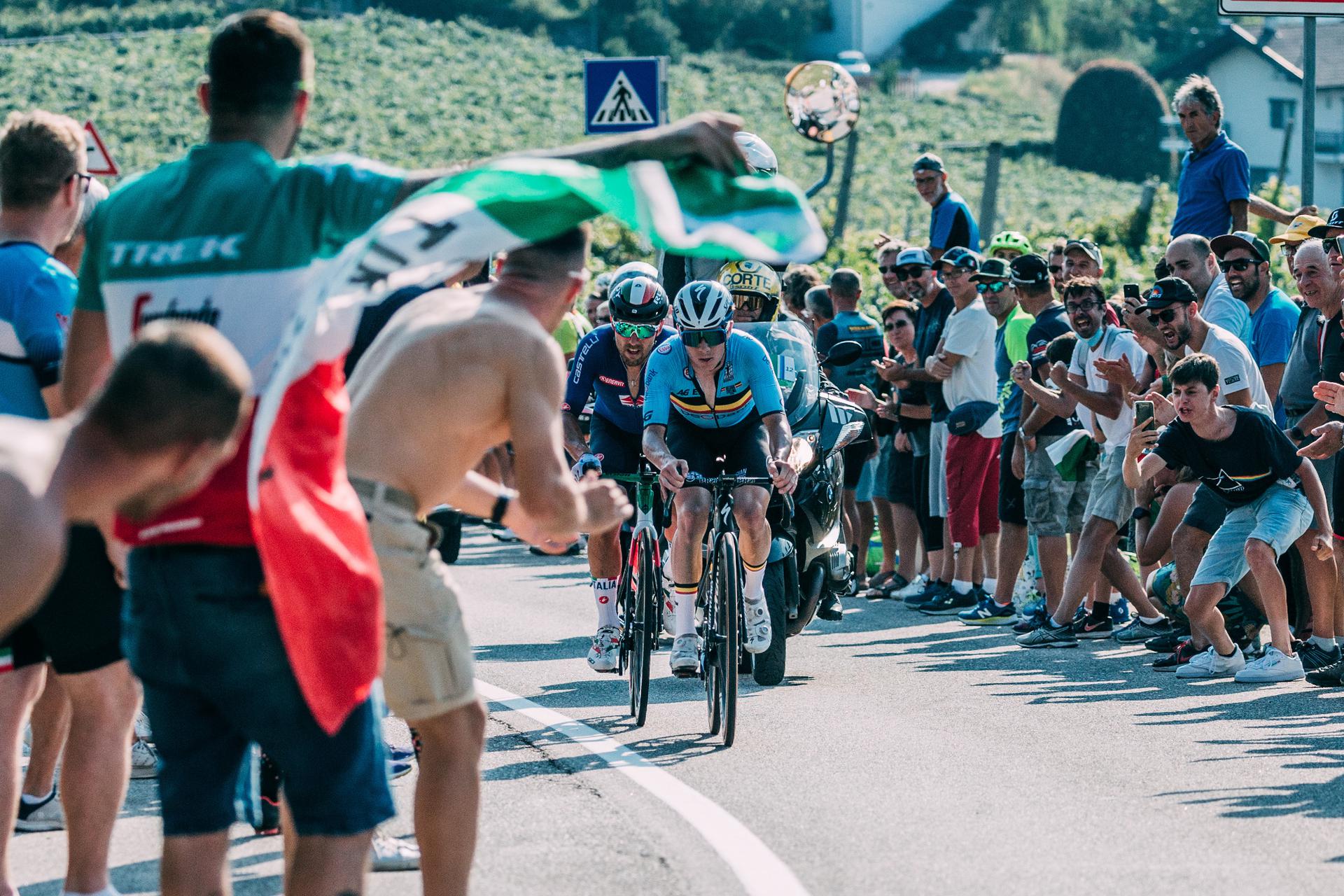 The premises for a day full of twists were all there, but the Elite Men race went beyond expectations, offering 4 hours of great cycling. The limited mileage (179.2 km) made sure that the race lit up already in the challenging in-line stretch in the beautiful Valle dei Laghi and up the iconic Monte Bondone.

France and Spain sparked things up early on, and at the foot of the Monte Bondone a selected group was already on the road with a 1:10 lead over the peloton: Vanhoucke (Belgium), Pinot, Paret Peintre and Bonnamour (France), De La Cruz, G. Izaguirre, Landa and Soto (Spain), Rapp (Germany), Bagioli (Italy), Reichenbach (Switzerland) and Großschartner (Austria).

However, on the Bondone ramps, the situation was reshuffled thanks to the first acceleration of Romain Bardet (France), followed like a shadow by Remco Evenepoel (Belgium), Pavel Sivakov (Russia) and Gianni Moscon (Italy), while it was already game over for the likes of Peter Sagan (Slovakia), Alexander Kristoff (Norway), Sam Bennett (Ireland) and Gino Mader (Switzerland).

The restless battle continued into the Trento circuit, and in lap four (out of eight) the decisive move happened. Two-time Tour de France winner Tadej Pogacar went on the attack, bringing away a quintet also including Hoelgaard (Norway), Campenaerts (Belgium), Trentin (Italy) and Padun (Ukraine).

Frenchman Cosnefroy, Belgian Evenepoel and Italian Sonny Colbrelli managed to bridge back to the lead, while Padun quickly lost touch. On the downhill, Hirschi (Switzerland), Hermans (Belgium) and Sivakov (Russia) also got back on the leaders to form a 10-man group at the sharp end.

In the seventh and penultimate lap it was the Belgian Evenepoel who dug deep on the Povo climb, followed only by Cosnefroy and Colbrelli, with Pogacar failing to organize the chase behind them. The leading trio showed up together at the foot of the last time up the Povo climb: Cosnefroy lost contact under Evenepoel’s pace, while Colbrelli managed to somehow resist all the way to the top. 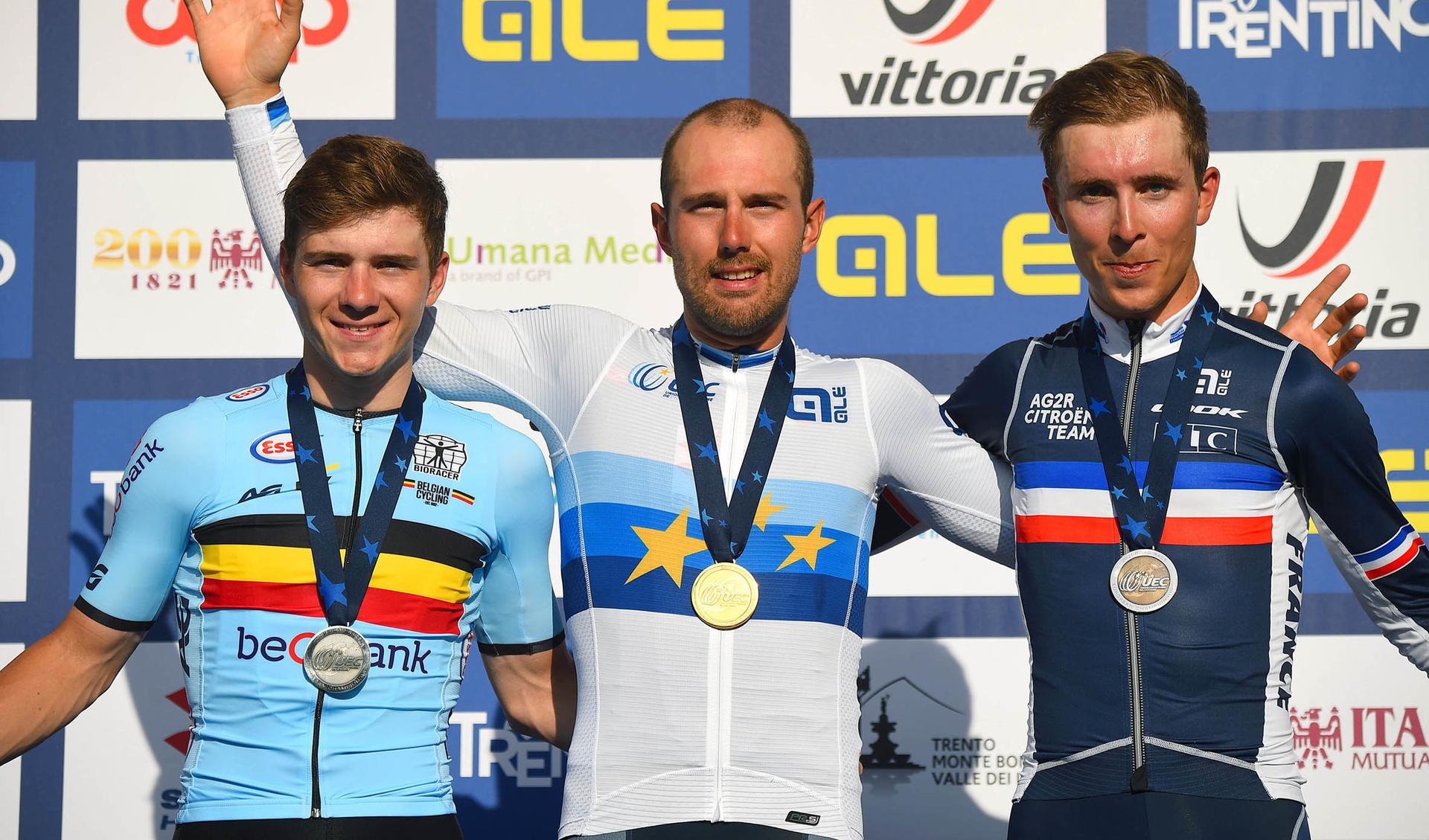 It all went down to a two-way sprint in Piazza Duomo, and as predictable, Colbrelli took the final bend at the front and confidently outpaced the Belgian. Evenepoel was clearly disappointed by the silver medal, but talent and time are on his side. Cosnefroy managed to resist to the comeback of the pursuers to secure a valuable bronze medal. Fourth place for Matteo Trentin, whose contribution to Colbrelli’s win was substantial, whilst Tadej Pogačar was fifth at the end of an aggressive race.

“Starting as a favorite when racing at home is not easy, as there’s additional pressure to cope with, but I felt well and wanted to deliver to reward the team’s great work. It was really hard to hold on with Remco on the final climb, but when I finally took the final turn at the front, I knew I had done it. Winning in this incredible atmosphere is a dream come true,” said Colbrelli.

THE WRAP-UP OF A DREAM WEEK 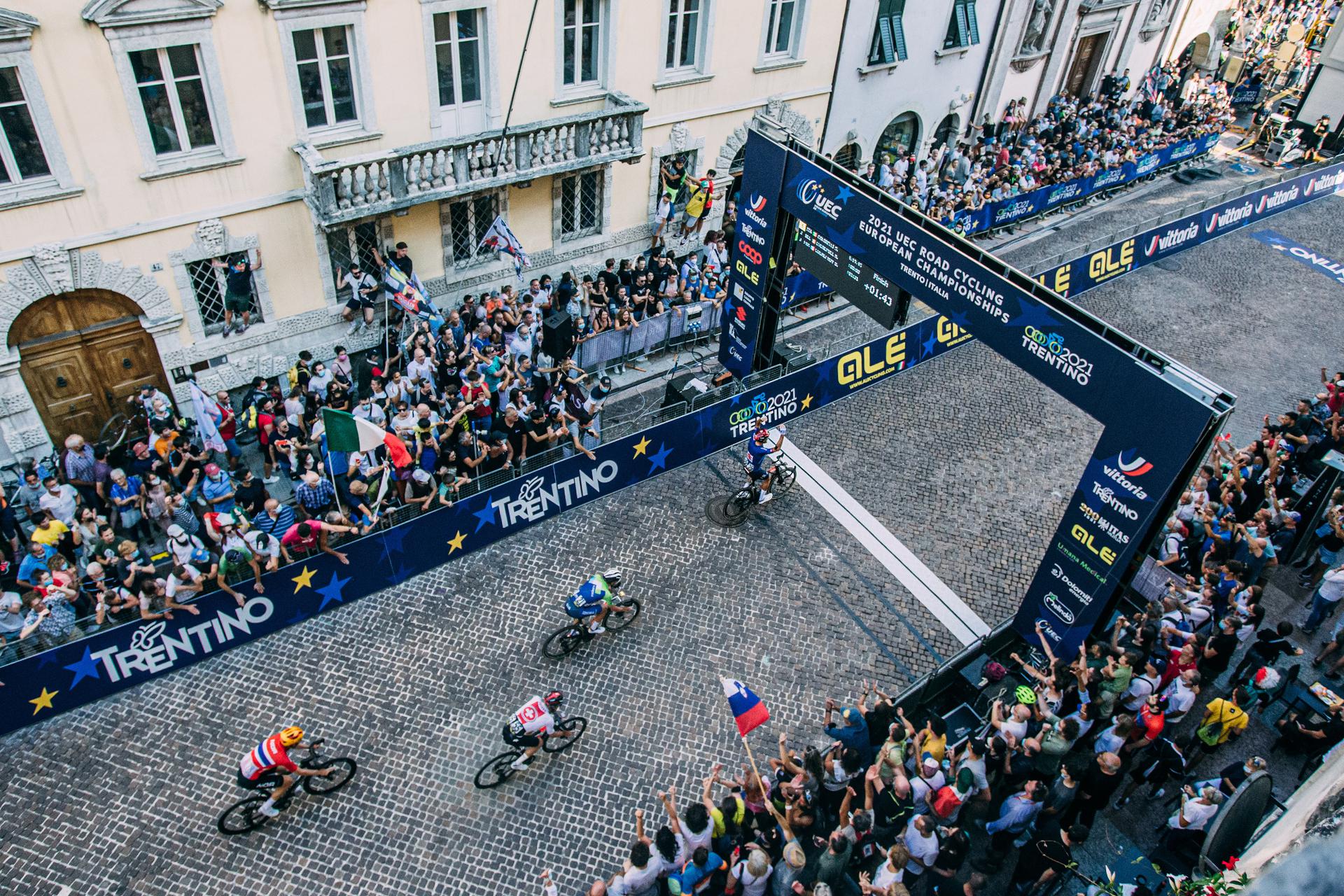 Great satisfaction could be heard in the words of Trentino’s Sports and Tourism Assessor Roberto Failoni and Trentino Marketing CEO Maurizio Rossini in assessing the UEC Road European Championships experience.

“Postponing the event from last year was clearly the best choice,” – Failoni stated. – “We have shown Trentino’s attention to major sporting events, and these European Championships have certainly had a global impact. We are proud of this outcome, and I would like to thank the OC and all those who contributed to this success. I think we went pretty close to perfection, and we are very proud of that.”

“Our TV images have reached no less than 71 Countries, and we can’t be anything but happy with the media impact of these European Championships” – underlined Rossini. – “Millions of people have got to know the beauty of Trento, Monte Bondone, the Lakes Valley and Trentino as a whole. The event has brought an immediate economic impact, as 20,000 people have been esteemed in Trento for the event, +20% compared to last year’s figures. Furthermore, many people stopped in the nearby valleys, and plenty more have come only for the final day of Sunday, as it clearly showed on the roads.”

UCI President David Lappartient also voiced his impression for the organizational quality of the Europeans, as well as for Trentino, a land that also boasts other top-level UCI events like the MTB World Championships in Val di Sole and the Tour of the Alps. “Trentino is an extraordinary reality for the world of cycling, I saw it two weeks ago in Val di Sole and once again here in Trento. There is a great passion and welcoming for our sport here, and this is combined with authentically extraordinary territories and great organizational quality. I am sure that the future holds more great cycling events in Trentino.”