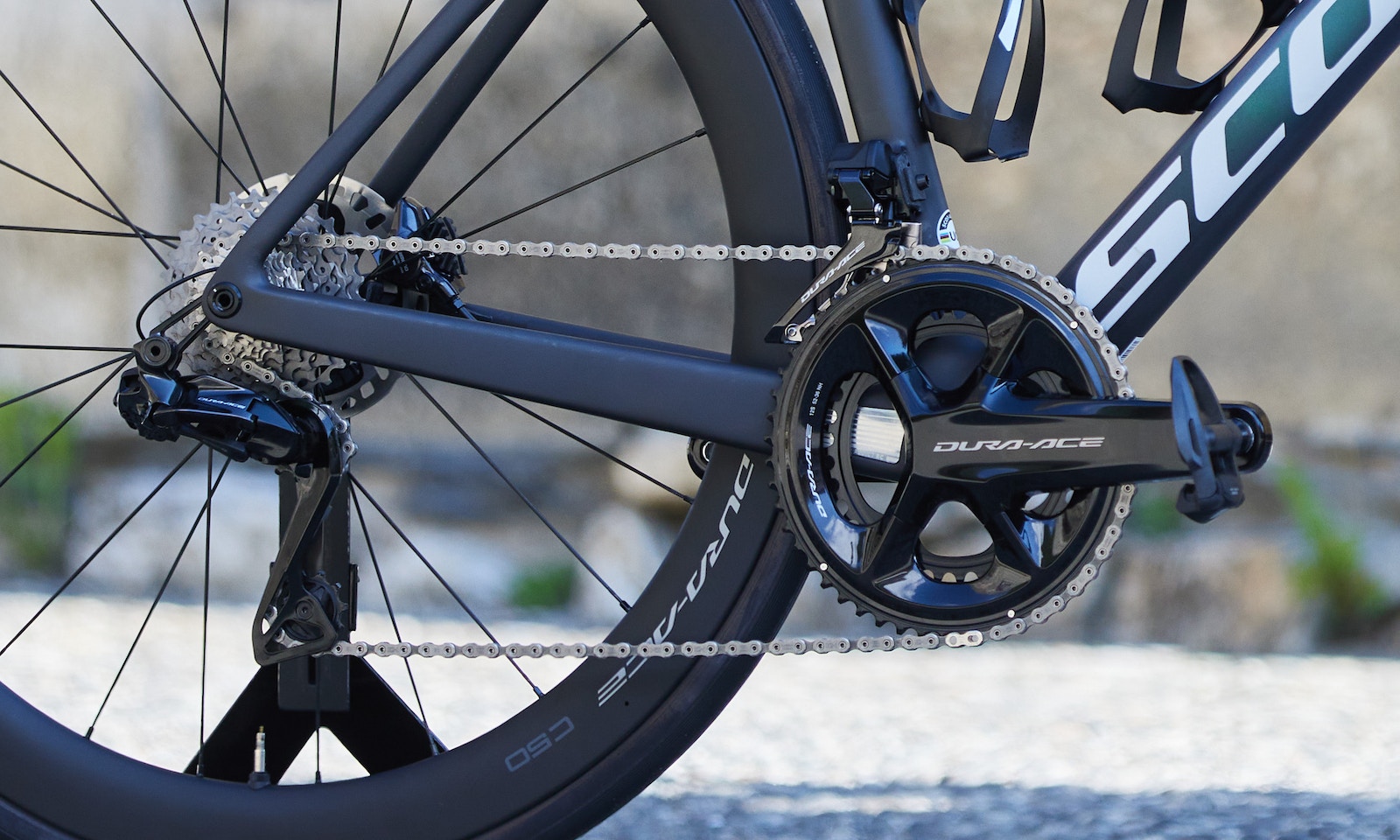 After five years in the pro peloton and adorning range-topping bikes and years of speculations when a new groupset would drop, Shimano has finally pulled the curtains back on the latest iteration of its Dura-Ace groupset. However, unlike recent years where a 12-month gap has separated the flagship product from its Ultegra offering, Shimano has boldly released them both at the same time.

Yep, two overhauled 12-speed electronic-only groupsets have been unveiled on the same day. There’s a bit to chew through here, but we’re here to cut from the wheat from the chaff and take you through the essentials. Read on for all you need to know about the all-new Shimano Dura-Ace R9200 and Ultegra R8100 road bike groupsets.

A Focus on Efficiency and Reliability 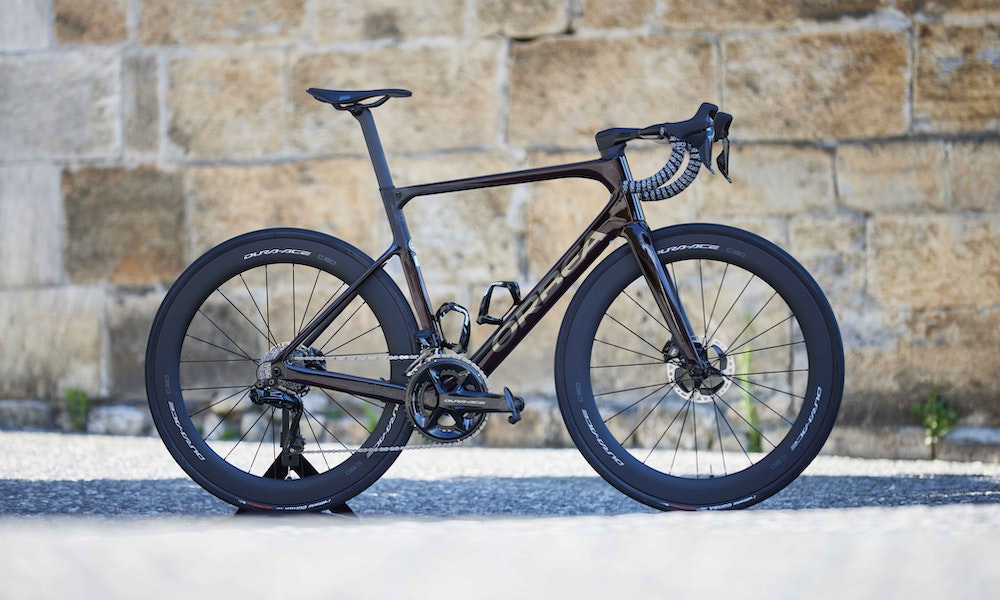 With the release of 9200 and 8100, Shimano claims to have made a concerted effort to offer the fastest and most precise shifting groupsets on the market. The heart of this is an overhauled Di2 platform that focuses both on speed and durability. The upgrades centre around an improved motor design within the derailleurs themselves that translates into a 58% decrease in shift speed at the rear derailleur and 45% at the front derailleur.

Both Dura-Ace and Ultegra make do with a hybrid wireless system. The shifters are wireless for the first time, whereas Shimano has opted to keep the battery and derailleurs on a wired connection to ensure reliability. The wireless shifters operate with CR1632 coin cell batteries in each shifter and are claimed to have a battery life of one and a half to two years under normal usage conditions. 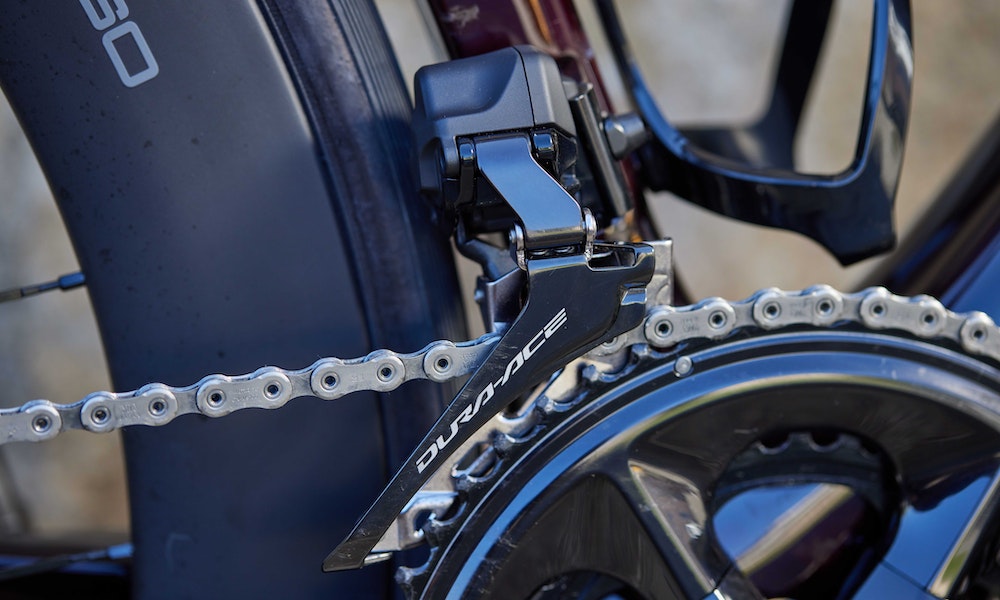 The wired portion of the system has been overhauled, too, with Shimano rolling out a new battery standard and smaller diameter Di2 wires. The new battery is claimed to last 1000km between charges. While this is somewhat less than the 2,000-5,000km between charges for existing R9100 and R8000 Di2 systems, it’s worth noting that the decrease is likely a result of the motor system being a higher output to provide faster, more precise shifts.

Shimano has also completely overhauled the system’s brains, with wireless connectivity to the shifters and third party products and system charging duties now handled by the rear derailleur. Moving the connections and Di2 operations such as syncro shifting to the rear derailleur mean that the bar end / under stem junction box and the WU111 wireless unit that currently handles wireless communications are now obsolete. This should make internally wiring the uber integrated bikes of today that little bit easier. 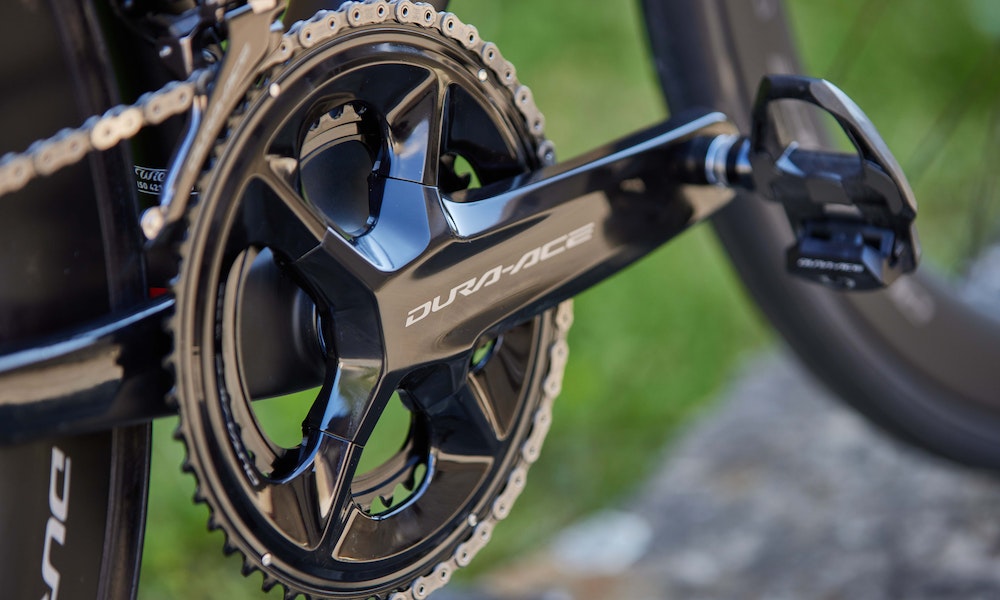 While the Di2 upgrades will likely have the biggest impact on ride feel, the key stat of the new release is the move from 11 to 12-speed shifting for both Ultegra and Dura-Ace groupsets. While the new 12-speed Cassettes feature a new spline configuration, they’re backwards compatible with 11-speed freehub bodies. The move to 12-speed is claimed to be optimised at the 6th, 7th, and 8th, with smoother, more consistent steps in this “sweet spot”. Shimano will offer two cassette options for both groups, an 11-30T and a new 11-34T option for those tackling steeper climbs.

In addition to the new cassette’s, the hero centrepiece of each groupset has had an update. Chainring sizes offered include 50-34T and 52-36T, which both Dura-Ace and Ultegra levels will score, while 9200 will also have the option of a whopping 54-40T option for dedicated racers. All three options will be available with an integrated power meter or non-powered at the Dura-Ace level. In contrast, Shimano will offer an Ultegra level power meter option alongside non powered variants in 50-34T and 52-36T configurations for the first time. The revised power meters boast both Bluetooth and ANT+ connectivity, 300 hours of ride time between charges and a claimed accuracy of 1.5%. 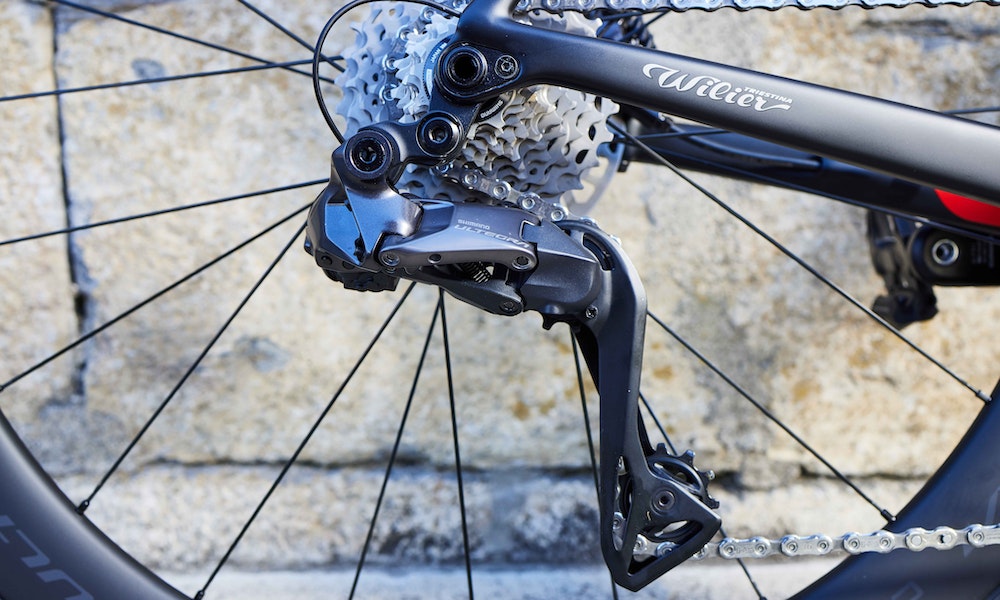 The integrated power meter option does come at a cost, though with the Ultegra level power meter set to cost AU$2,019, while the 21g lighter Dura-Ace option will set riders back AU$2,436.

160mm to 175mm crank lengths will be offered across both groups, with Dura-Ace also scoring a 177.5mm option. The aesthetics have been subtly updated for both models, while Q-Factor for both offerings has grown from 146mm from existing 11-speed offerings to 148mm.

Refined Brakes Across the Board 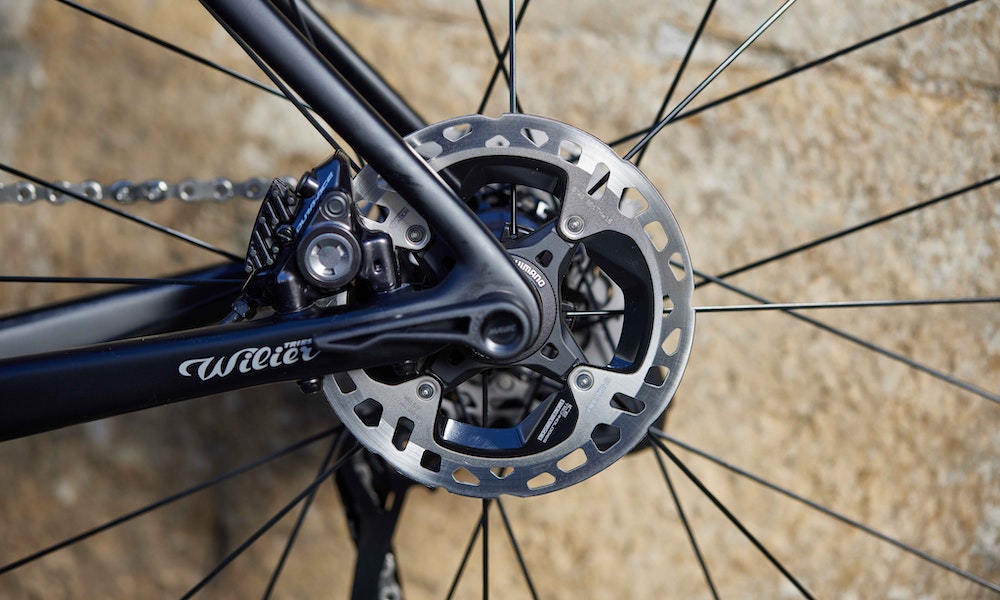 Complementing the updated electronic shifting and efficient drivetrain is a revised braking system. The key upgrade is the implementation of Shimano’s Servowave technology. Servowave essentially allows for increased braking power at the callipers with less effort required at the lever itself, bringing the pads in contact with the rotors quicker, leaving more lever pull for feathering and modulation. The system has been used with great success in Shimano’s XT and XTR mountain bike groupsets for some time now and across the GRX gravel groupsets.

Both R9200 and R8100 series groups score updated callipers to match. Shimano claims it's now possible to bleed the brakes without removing the calliper thanks to an updated design which has seen a separate bleed port and valve screw added.

In addition, brake noise is also claimed to have been reduced thanks to a move to XT MT800 and XTR MT900 rotors. The rotors have already proven a popular upgrade with the peloton and those in the know, thanks to their increased strength and superior heat dissipation.

In other news, the rim brake isn’t dead just yet for the puritans or those hesitant to change the disc brakes. A rim brake offering will be included at both levels; however, as eluded to previously, mechanical shifting has gone the way of the dodo at the top end of town at least.

Doubling Down on Ergonomics 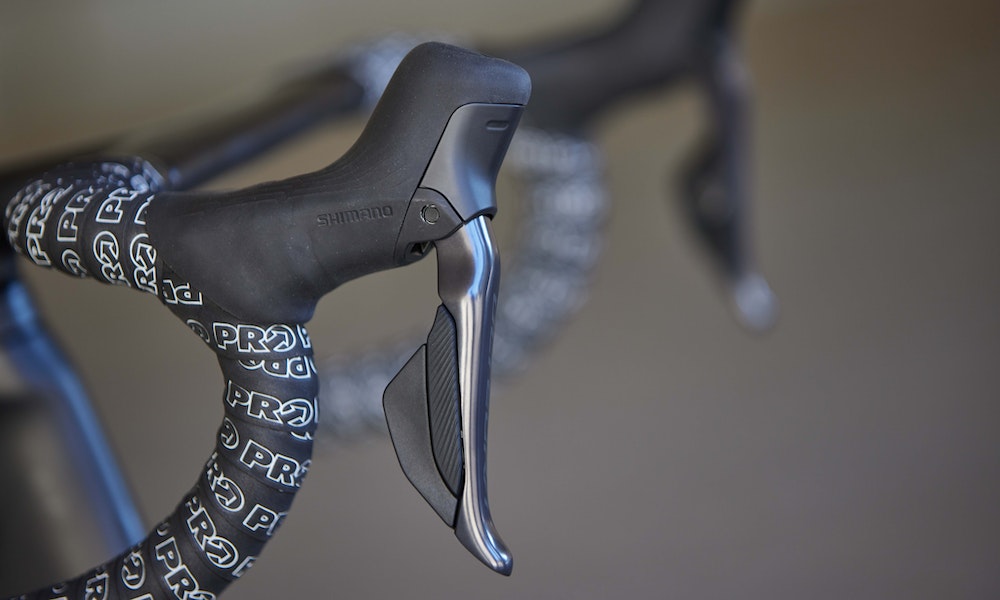 Shimano has refined its shifter ergonomics to suit modern riding positions and hand placement preferences in the case of evolution rather than revolution. The hydraulic disc brake shifters across both groups have been tweaked, offering a “raised head portion, with a slight inward curve.” An increased offset between the shift buttons has also been added. These tweaks are said to provide a better grip on the hoods, a better three-finger grip behind the brake lever, and better differentiation between the up and down shift buttons, especially when riding with gloves. 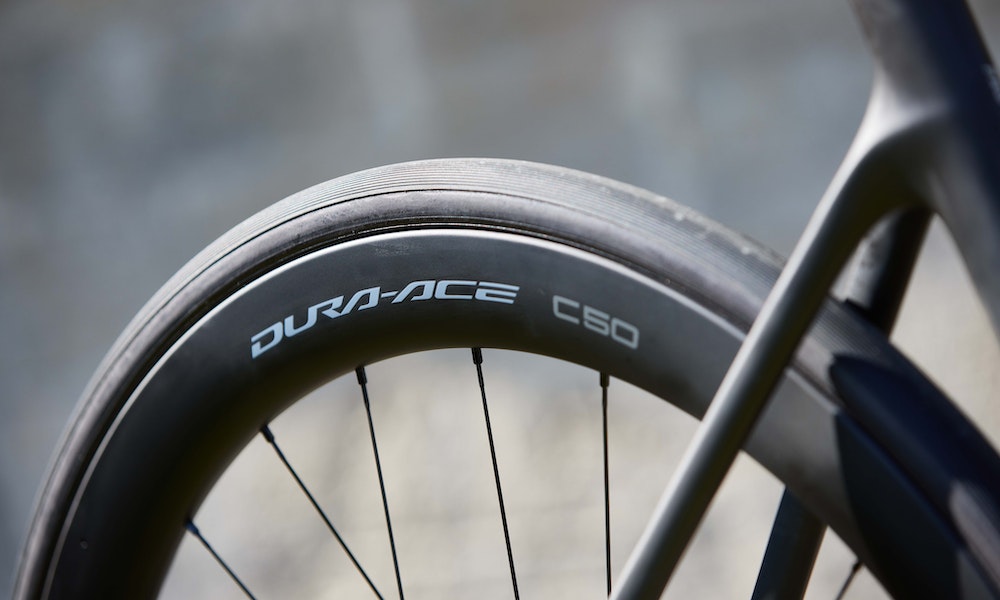 36, 50 and 60mm rim heights will be offered across both groupsets, with tubular options offered at Dura-ace level, as well as a tubular rim brake option for racers.

Weights across the new range of wheels are impressively low at Dura-Ace level, with Tubular Disc options tipping the scales from just 1154g for the 36mm tubeless disc wheelset and topping out at 1437g for the C60. Tubeless weights are understandable more, ranging from 1350g to 1609g, whereas the Ultegra variants score a slight weight penalty, weighing 1488g for the C36, 1570g for the C50 and 1649g for the C60.

Shimano claims the latest generation of wheels are 63% stiffer at the Dura-Ace level and 9% at Ultegra level compared to the outgoing tubeless variant of the C40. Lastly, the new hoops are said to be more aero, too, with both levels scoring the same rim dimensions, which are said to save up to 5w at “race speeds”. 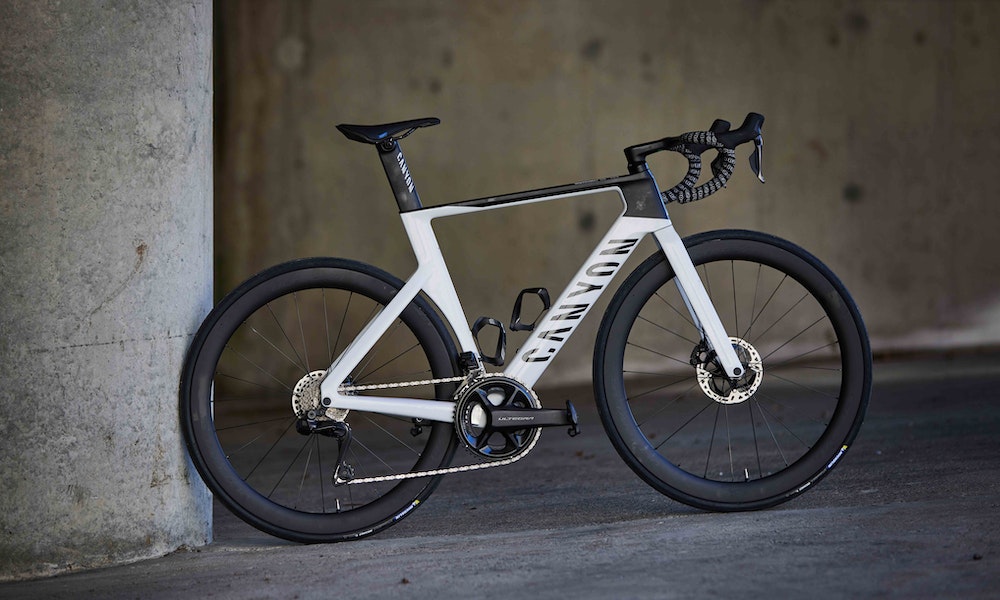 At the time of publishing, Shimano states that both Dura-Ace and Ultegra groupsets are available from “October 2021” onwards.

On pricing, well, let's say it’s in line with its intended professional, elite and dedicated enthusiast intended user. Going off RRP’s provided at the time of launch, a full Ultegra R8170 Disc groupset including a charger, battery and wiring will set riders back AU$3,488, whereas a Dura-Ace R9270 group with the same inclusions will cost from AU$5873. US pricing is yet to be detemined.

If you'd rather sidestep the queue for a full groupset, and go for a new ride altogether, 2022 road bike models with the new groupsets fitted from the factory are expected to hit showroom floors from October onwards. as always, check with your nearest bike store for local availability and lead times

With both Ultegra and Dura-Ace adorned rides set to hit showroom floors in the coming months, why not check out the range of 2022 road bikes on offer from leading independent retailers across the country right here, at BikeExchange