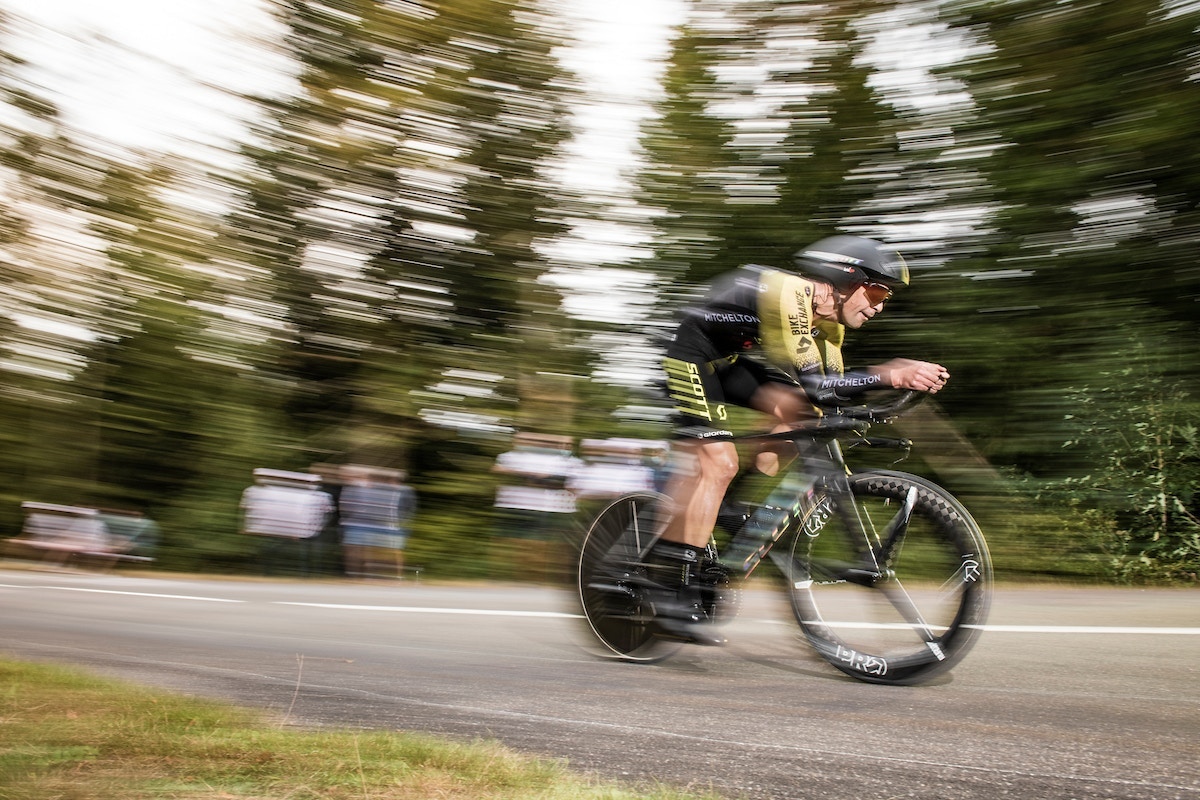 Tadej Pogačar (UAE-Team Emirates) put in the time trial of his life Saturday to overthrow a 57-second deficit on Primož Roglič (Jumbo-Visma) and snatch the overall victory of the Tour de France.

The 21-year-old dominated the 36-kilometer test to win the stage and beat second-place Tom Dumoulin by 1:21.

Pogačar’s incredible performance moved him to the top of the GC by 59 seconds and sees him secure the yellow, white and polka dot jerseys. The 21-year-old’s performance is one of the most dramatic turnarounds in Tour de France history since the Greg LeMond – Laurent Fignon drama in 1989.

“I don’t know what to say,” Pogačar said after the race. “I don’t know when I will get this but I’m really proud of the team. They did such a big effort and to get the yellow jersey on the final day is just a dream. We were dreaming that from the start and we achieved that and it is amazing.”

“It was not just me, it was all the team because we did the recon,” he continued. “I knew every corner, every pothole on the road, I knew where to accelerate.” 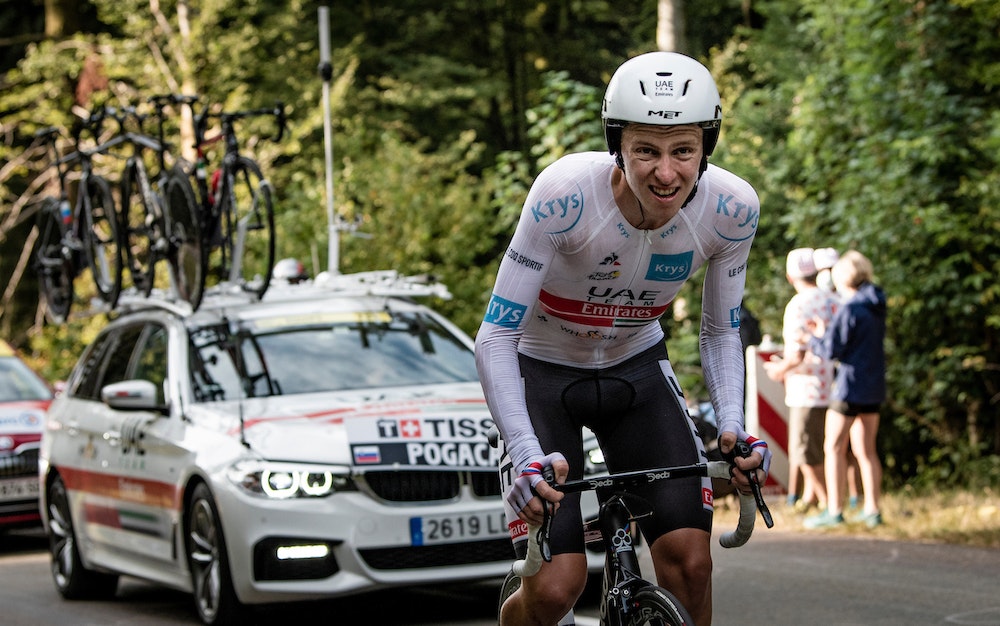 Pogačar rode a confident and smooth race, blitzing out of the starting ramp in Lure to better Roglič’s time splits all the way through the flat start of the time trial before obliterating his Slovenian rival on the climb.

“I was listening to my radio on the flat part, and on the climb, I didn’t hear anything from the radio because the fans were too loud and I got no time gaps, nothing. I knew the climb very well and just went full gas from the bottom to the top.”

Pogačar’s stellar performance comes in his Tour de France debut, a race in which he was often outnumbered as his team was robbed of riders through injury. The race was only his second grand tour having placed third at last year’s Vuelta a España.

“Actually my dream was just to be at the Tour de France and now the dream is I’m here and I won,” he said. “This is unbelievable.”

The race was played out over a rolling first 30km before a fearsome 6km climb to the finish line atop the Planche des Belles Filles. Having ridden toward the climb already slower than Pogačar’s time by around 20 seconds, the lights began to go out on Roglič’s yellow jersey hopes from as soon as he changed from his TT bike to a road machine, with the switchover far from the smoothest of the day.

Roglič looked in trouble through the climb, often out of the saddle and far from his usual seated high-cadence style. He continued to shed time through the ascent, and with four kilometers remaining had been bumped to second on the virtual GC. The 30-year-old turned increasingly pale and disheveled as he saw the race slipping away from him, losing around one minute to Pogačar over the course of the climb to the Planche des Belles Filles. 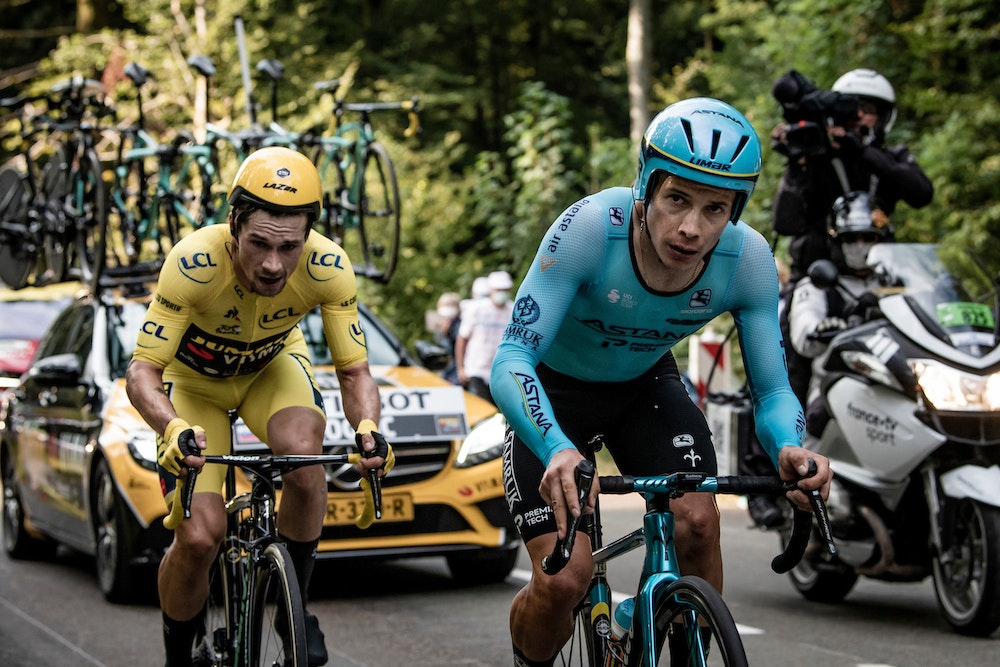 Roglič crossed the line and collapsed to the floor with his team gathering around him as they absorbed the shock.

“I just obviously didn’t push enough. It was like that,” Roglič said. “I was just more and more without power … I was giving everything to the end.”

Roglič finished the stage in fifth place, 1:56 down on Pogačar, and second on the GC having led the race since stage 9.

“We will see [how I deal with this],” he said. “Still I can be happy with the result and the racing we showed here, so let’s take the positives.”

In a further blow to Jumbo-Visma, Pogačar ripped stage victory away from Jumbo-Visma rider Tom Dumoulin, who only minutes before, had set a better time than his teammate Wout van Aert, who ended up in fourth on the stage. 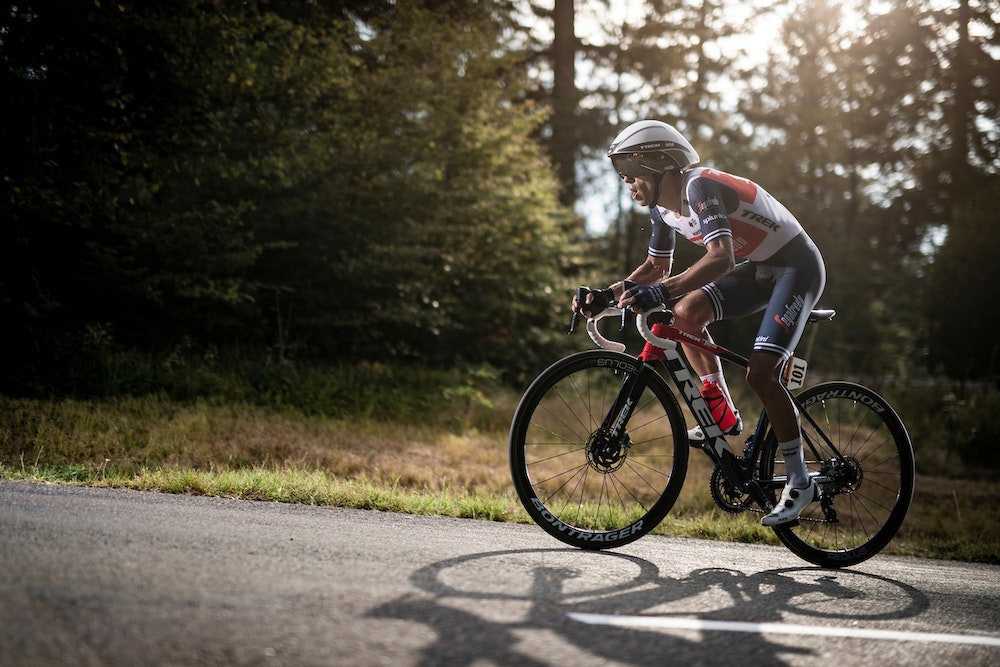 Richie Porte (Trek-Segafredo) also put in a star ride to take third on the stage. His race against the clock was sufficient to move him up from fourth to third overall having overturned a deficit of more than 90 seconds on Miguel Ángel López (Astana), who started the day on the podium.

The Colombian’s poor performance saw him tumble down the GC from third overall to sixth, with Mikel Landa (Bahrain-McLaren) and Enric Mas (Movistar) moving up to fourth and fifth place.

The Ecuadorian had started the stage with a two-point lead on Pogačar in the race for the polka-dot jersey, however, the Slovenian’s searing pace on the climb saw him take the maximum mountain points and along with it, the climber’s classification.