Since the colder months began creeping up, so have the layers and warmer apparel. As a brand that’s legendary in the Road world, but fairly new to the Mountain Bike scene, Rapha has made an impressive debut. Recently I’ve been wearing the Trail Windblock jersey more often than not for my day-to-day rides. The full length top takes a smart approach, utilizing a windproof material at the front which covers a full merino base layer. It’s a given that the windblock section keeps cold air coming at you from penetrating, but the real genius is that moisture can still escape efficiently as it’s completely unobstructed at the rear panel due to merino’s excellent wicking properties. Anyhow, for a full breakdown read on to see how it’s been working out… 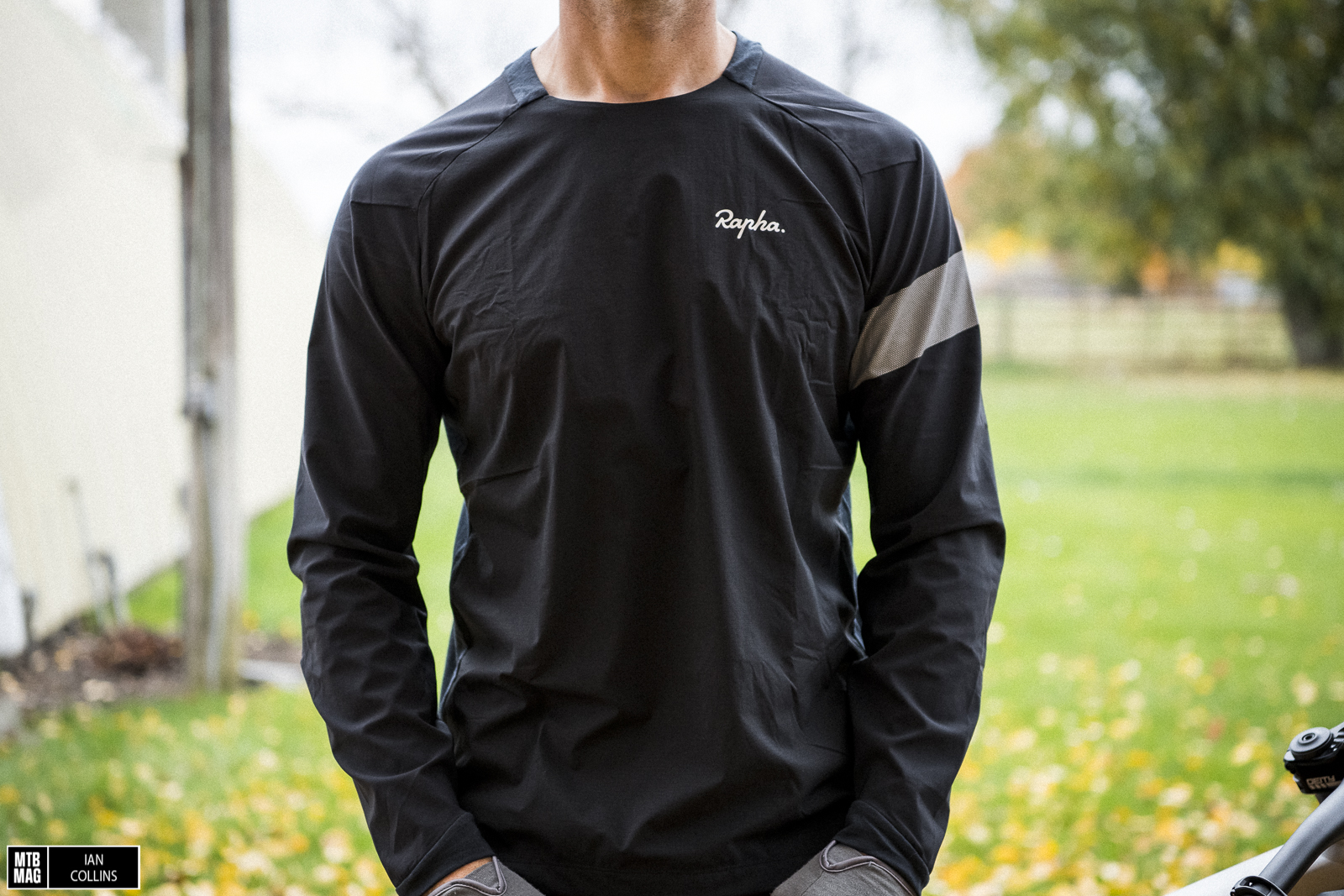 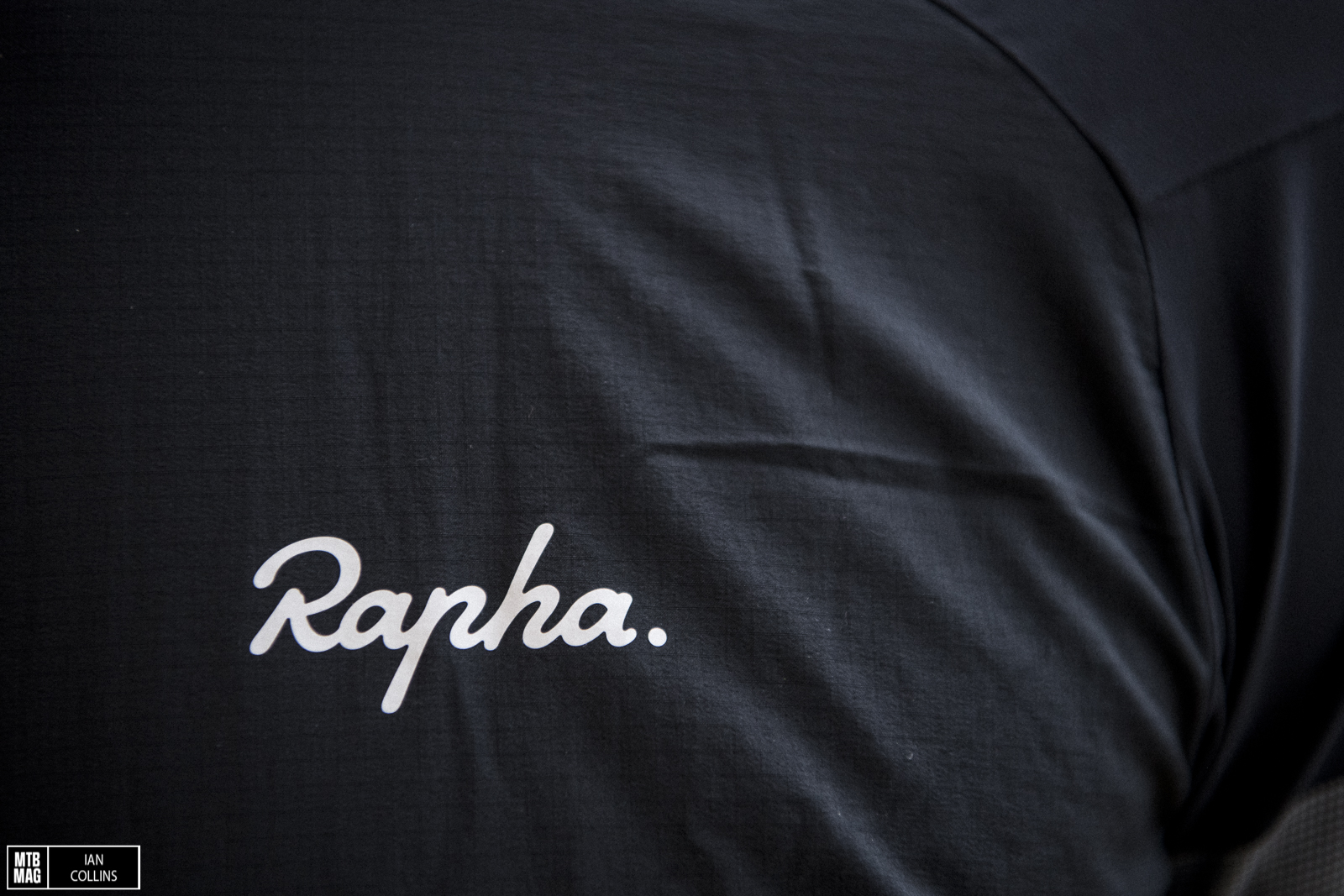 As you can see above, the front panel is constructed from a box section Ripstop material, which cuts wind and helps keep you warm without necessarily having to layer up. 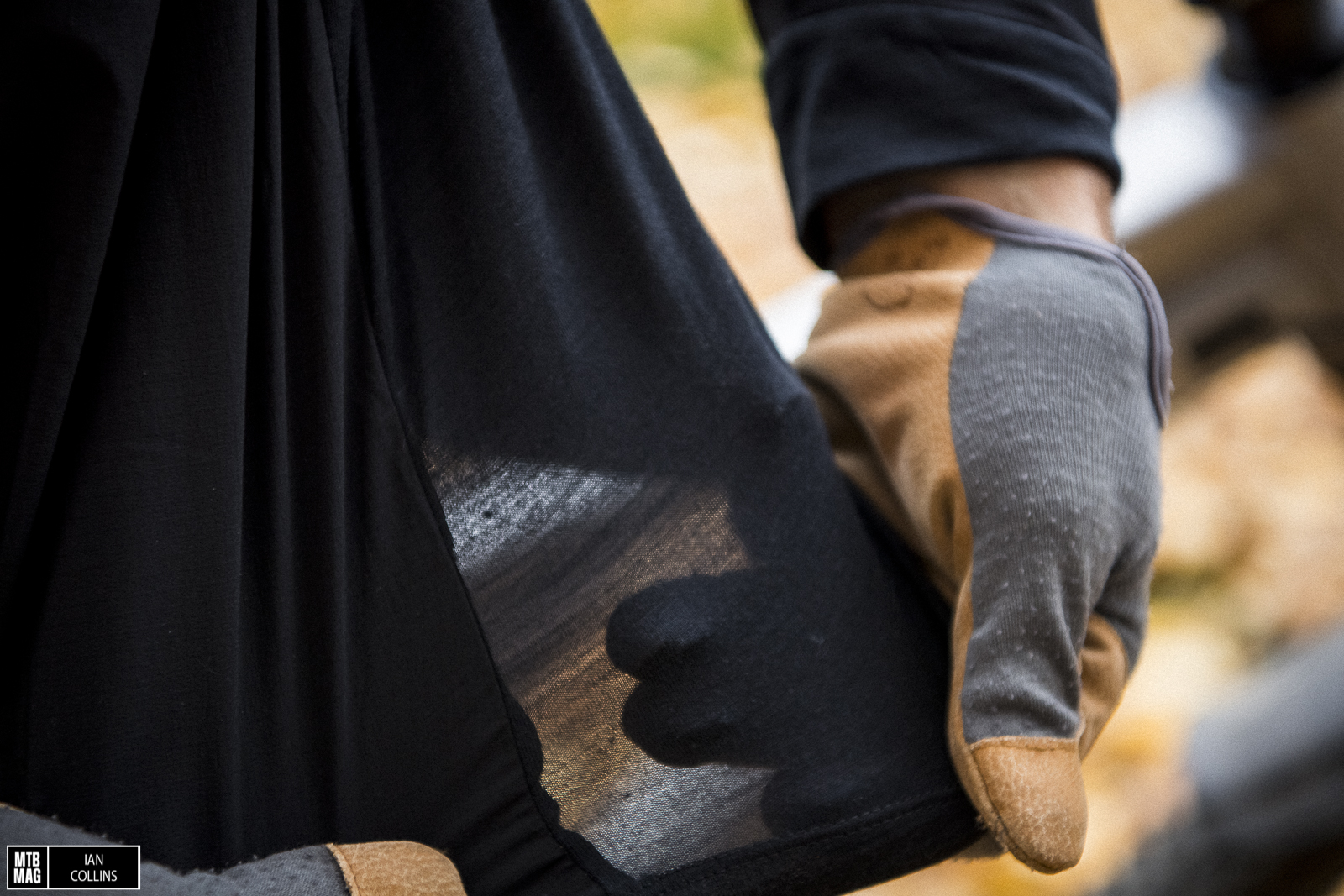 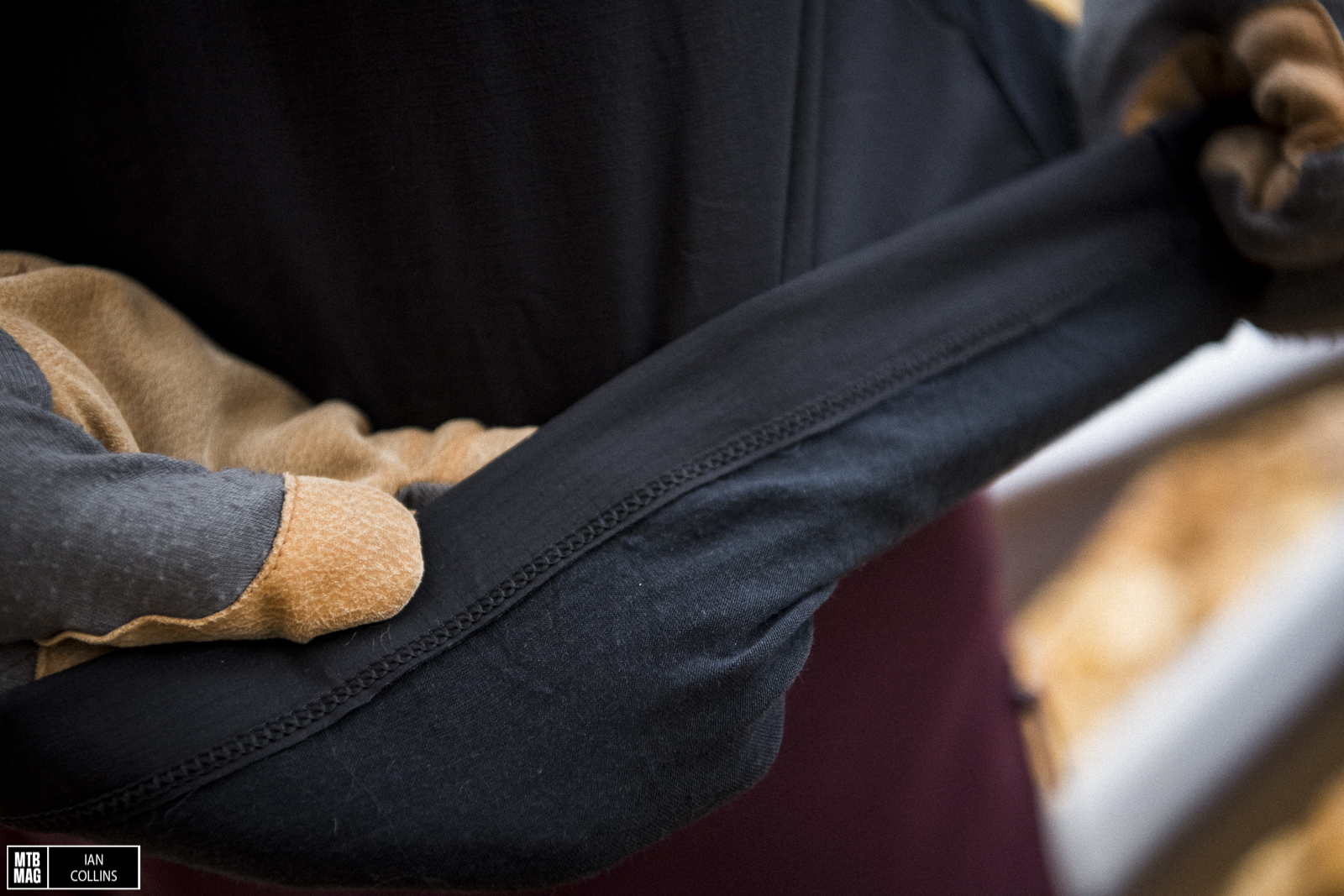 The photo above shows how the two sections of fabric mesh together. 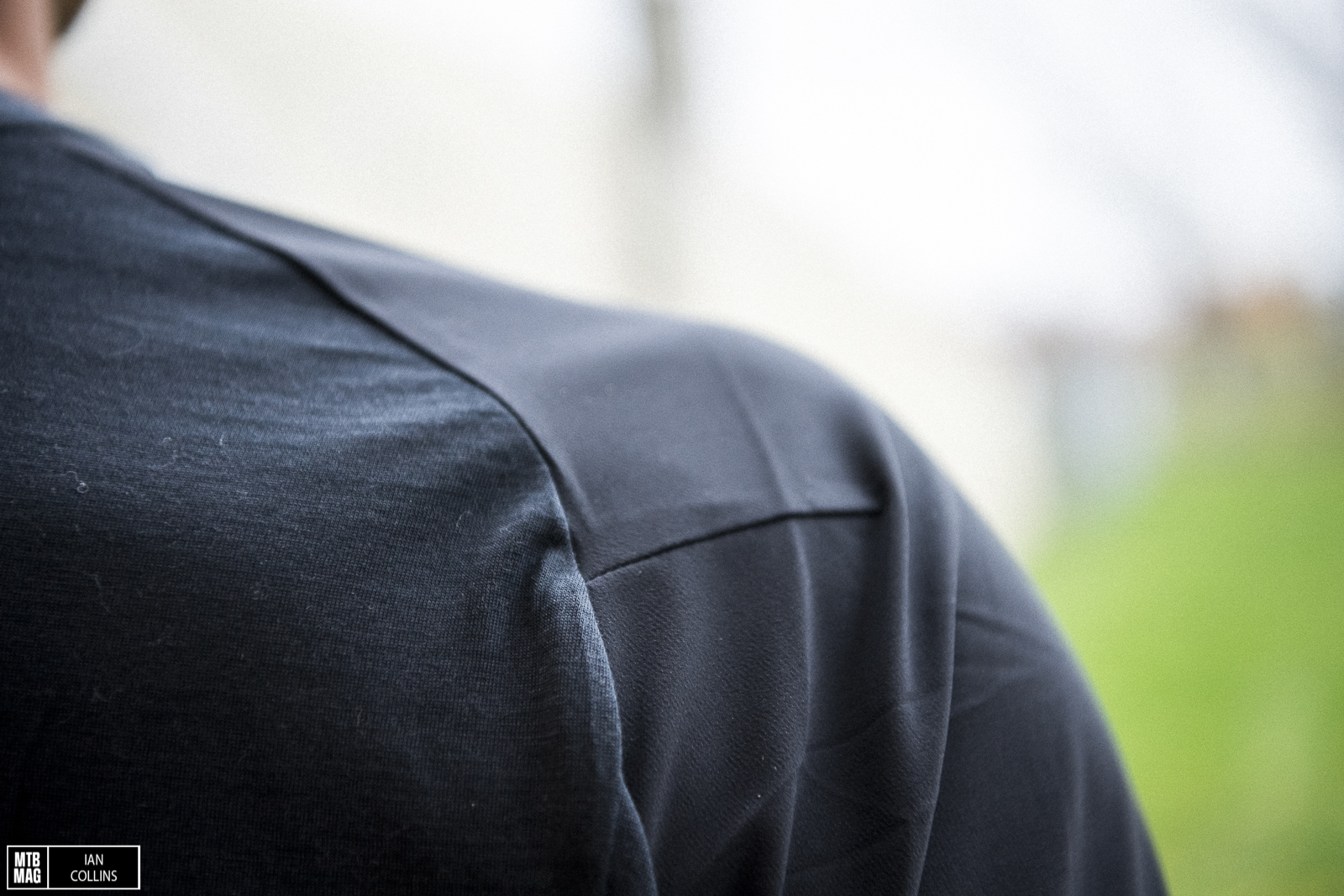 One of the best aspects about Rapha’s apparel is how well articulated and anatomical it is. There are multiple darts sewn throughout to improve range of movement and fit. In short, every piece of Rapha garb I’ve worn is 10/10 when it comes to cut and sew. 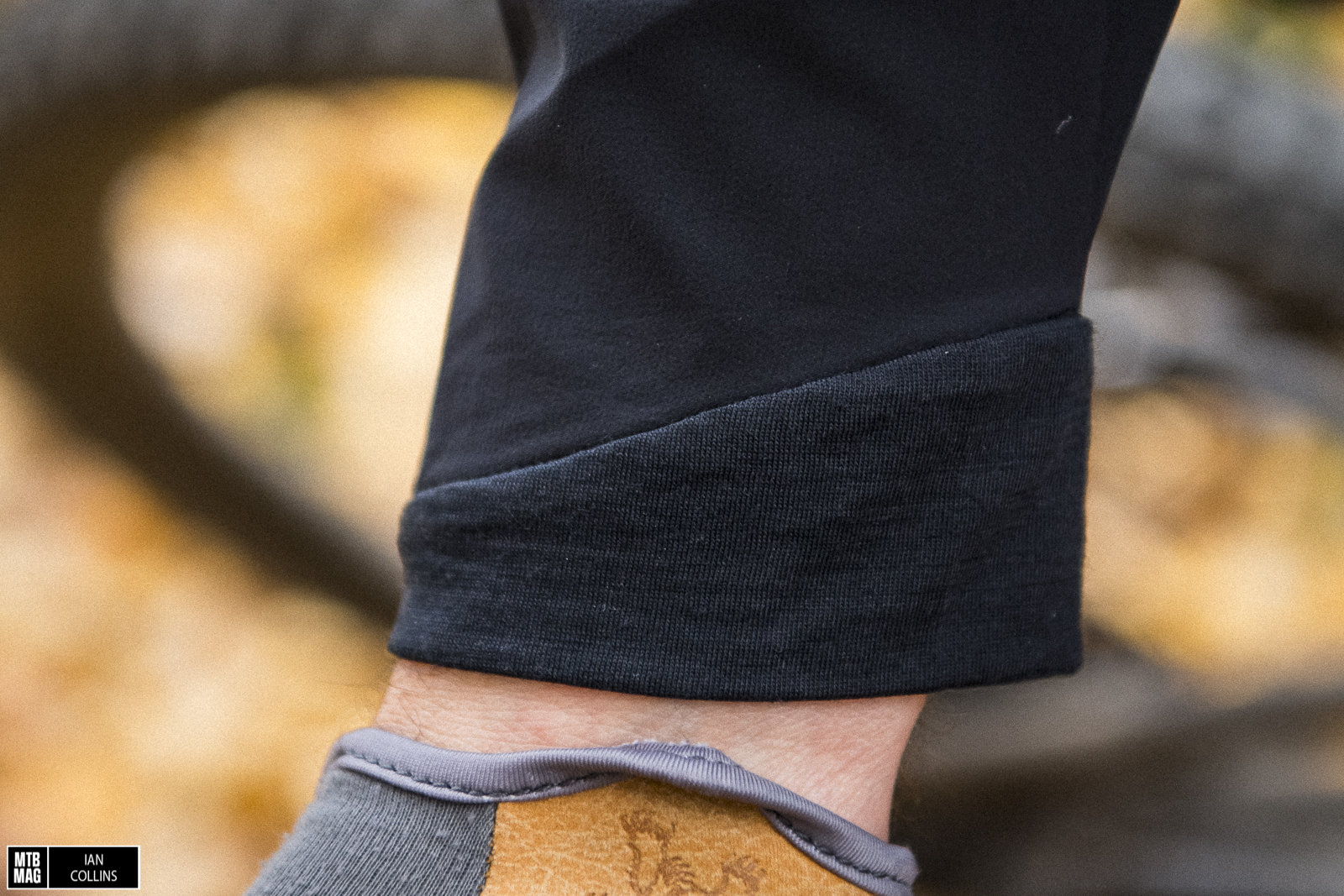 The merino underlayer extends out and keeps the cuff a bit less rigid and more comfortable. 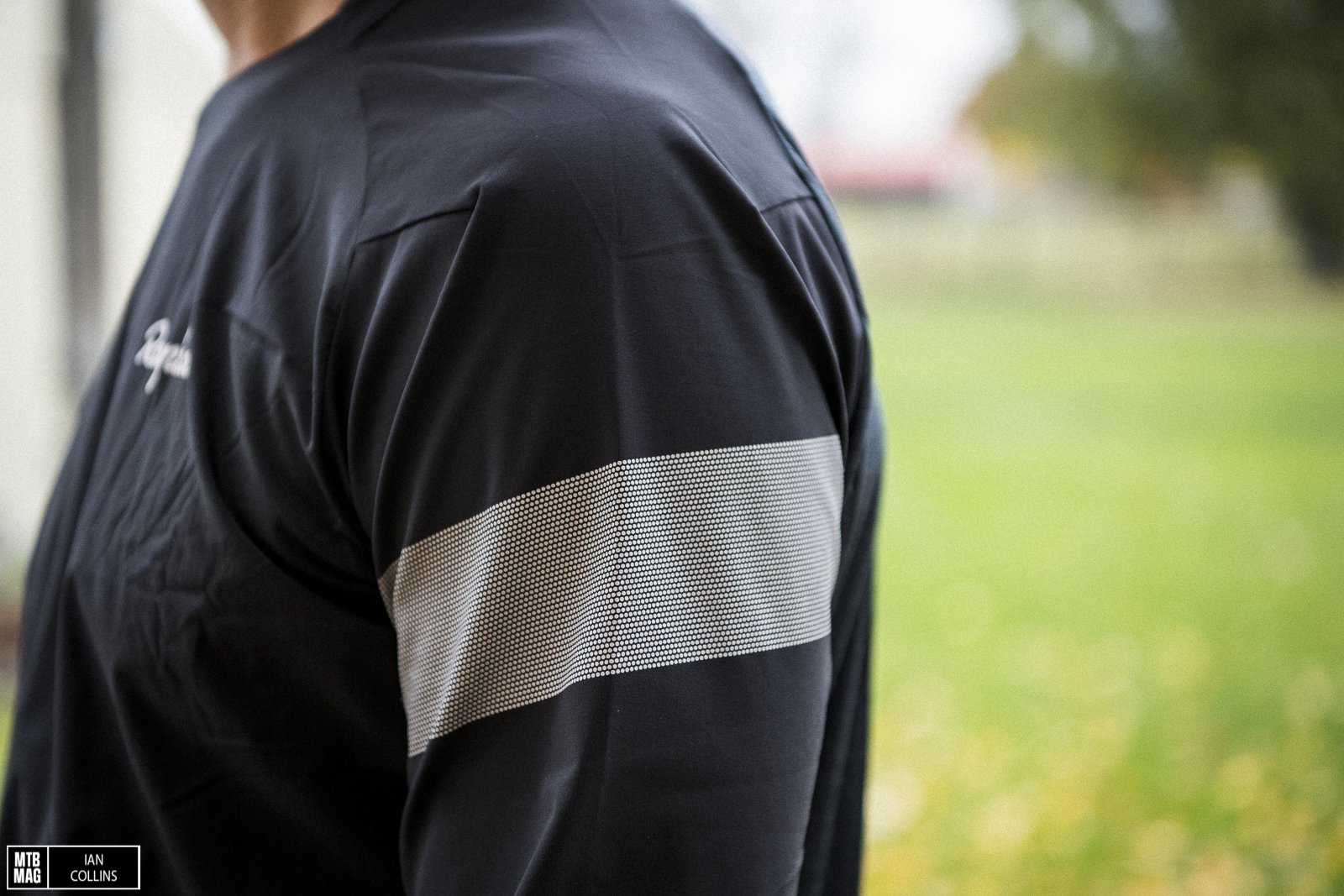 Last, but not least – Rapha’s main visual identifier is the arm band on the left sleeve. It’s a nice subtle hit that serves no real purpose but, hey – at least it is subtle.

Beginning with fit, the size Large fit me perfectly at 6 foot tall – as it should. I particularly like the way that the jersey is formed around being quite comfortable while in a riding position. There isn’t any weird pulling, rubbing or disproportionality between the core and the sleeves. As you could imagine, the materials are also top notch – this goes for being comfortable to the touch as well as performing important duties such as wicking moisture and modulating body temperature in changing weather. The durability has also been excellent thus far and despite heavy use, it hasn’t taken on any odors, nor have the materials degraded.

As you can imagine, so far I’ve been floored by this jersey. Prior to receiving it for testing, my rides in the cold (read: not freezing, but definitely chilly) weather typically entailed wearing a long sleeve jersey and a light weight jacket. While I’m not opposed to that setup and would likely still opt for it if precipitation is involved, I love the simplicity of rolling out with just one layer that manages the cooler brilliantly without having to layer. This jersey meant that I wasn’t constantly fussing with taking a shell on and off and tying it around my handle bar or stashing it in attempts to avoid getting too hot or too cold. Now, it’s worth noting that if I know there will be some rain, I’ll wear a shell as the merino back panel doesn’t do much to keep moisture out.

All in all this is a great piece for the shoulder seasons as well as Winter, depending on where you live. Beyond the quality and comfort, the greatest strength is the versatility and range in temperatures that it remains comfortable in – I haven’t ridden anything quite like it today. Try as I might, I can’t conjure up any particular downsides aside from the lack of availability. However, according to Rapha, more will be in stock in Mid-December.