THE ONE (REALLY SIMPLE) REASON THAT DISC BRAKE WHEELS ARE BETTER 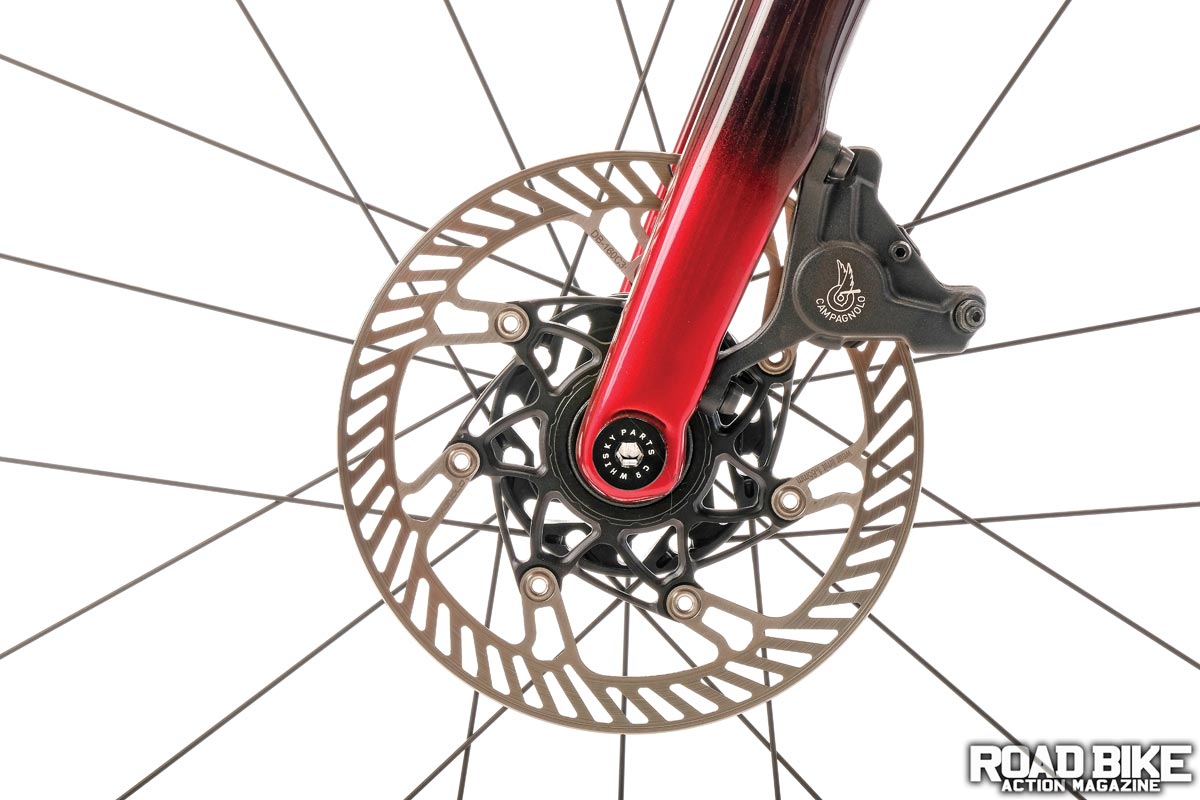 Q: One important performance difference between rim brakes and disc brakes that I do not see being mentioned is the rotating mass that disc brakes add to the bike. It is well-known among racecar engineers that rotating mass needs to be minimized because it has a greater effect on acceleration than a non-rotating mass. The disc part of the disc brake is the rotating mass. There is no doubt that disc brakes are more effective at slowing heavy vehicles, such as heavy bikes or cars. However, for most bike applications, rim brakes do a more than adequate job at braking bikes. This has been proven many times over with pro riders in the Tour de France. Any time speed changes, rotating mass resists the change, increasing the time it takes to change speed. Whenever getting from point A to point B in the shortest time matters, rim brakes on bikes will outperform disc brakes.

A: While I completely agree with you that lowering rotational mass is important, the moving of the braking system is much more complex than you imply. When you think of racing in motorsports, the importance of precise and dependable braking is so valuable that the weight penalty always outweighs the lighter option. Think of the size of a racecar rotor, especially the front of motorcycles with dual rotors (one on each side in the front.) This added weight doesn’t hinder, but, in turn, adds surface area for heat dissipation, as well as stopping power. This is the same on a bicycle where moving the excess material closer to the hub diminishes its effects rotationally while maximizing returns.

When we think of braking, it seems so simple, and on entry-level road bikes, your theory almost holds up since less of the system will change (rim/tire). The flip side is that at the top tier there is almost no comparison. As we look back on rim brakes and their evolution, we were at a point that composites could not reduce weight any further while still maintaining the structure during braking. Even with that said, the best of the best had a very high rate of failure. Failure while braking is never worth any gains that might be had during acceleration.

So, in order to evolve braking performance, the systems themselves also have to evolve. For many years my disc brake mountain bike rims were considerably lighter than any road carbon hoop while also having incredible durability. This is because they did not have the added weight and structural mass needed to offset the heat and pressure created on the composite when using a rim brake. That heat not only meant more material (weight), but it also meant there was a much more progressive rate of power loss over time during braking. All of this is a negative, and why many recreational events like Levi’s Gran Fondo would not allow the use of carbon wheels with rim brakes for their event.

Disc brakes might add a slight bit of weight to the rotating system, but in most cases, it is offset by the ability to now run lighter hoops. Even if those two were equal in weight, the disc would have an advantage because it is closer to the axle. This comes down to physics and the radius from the axle. If the mass is the same but the radius changes, the effect is very different. As a quick example, 100 grams that is 8cm from the axle is 140 times less impactful than if it was at 30cm from the axle. This means that it is not only 140 times less impactful to speed up but to slow down, too.

“When you think of racing in motorsports, the importance of precise and dependable braking is so valuable that the weight penalty always outweighs the lighter option.”

What does that mean? If you are to lose 1 gram from a rim, you could theoretically add 140 grams to the rotor without any effect. This is, of course, the simple math, and since the rotor would not have all of its mass at 8cm, it could be heavier with no impact.

The other side effect is, we are able to drop much more than 1 gram safely from a rim, and these savings can be transferred into larger tires that will add more traction. More traction is beneficial in not only stopping but cornering, too. Then, you can toss aero into the mix by eliminating a restraint—the flat braking surface—and you can now optimize the complete profile of the rim for even more savings. This is the reason disc brakes are here to stay, because they allow the entire system to be improved without compromising safety and reliability.

And last, as we have frequently pointed out, what the pros do and what they ride should have little practical bearing on all us recreational riders.

The post THE ONE (REALLY SIMPLE) REASON THAT DISC BRAKE WHEELS ARE BETTER appeared first on Road Bike Action.