TRAINING TO WIN – THE MOTOCROSS AND CYCLING NEXXUS WITH ZACH OSBORNE 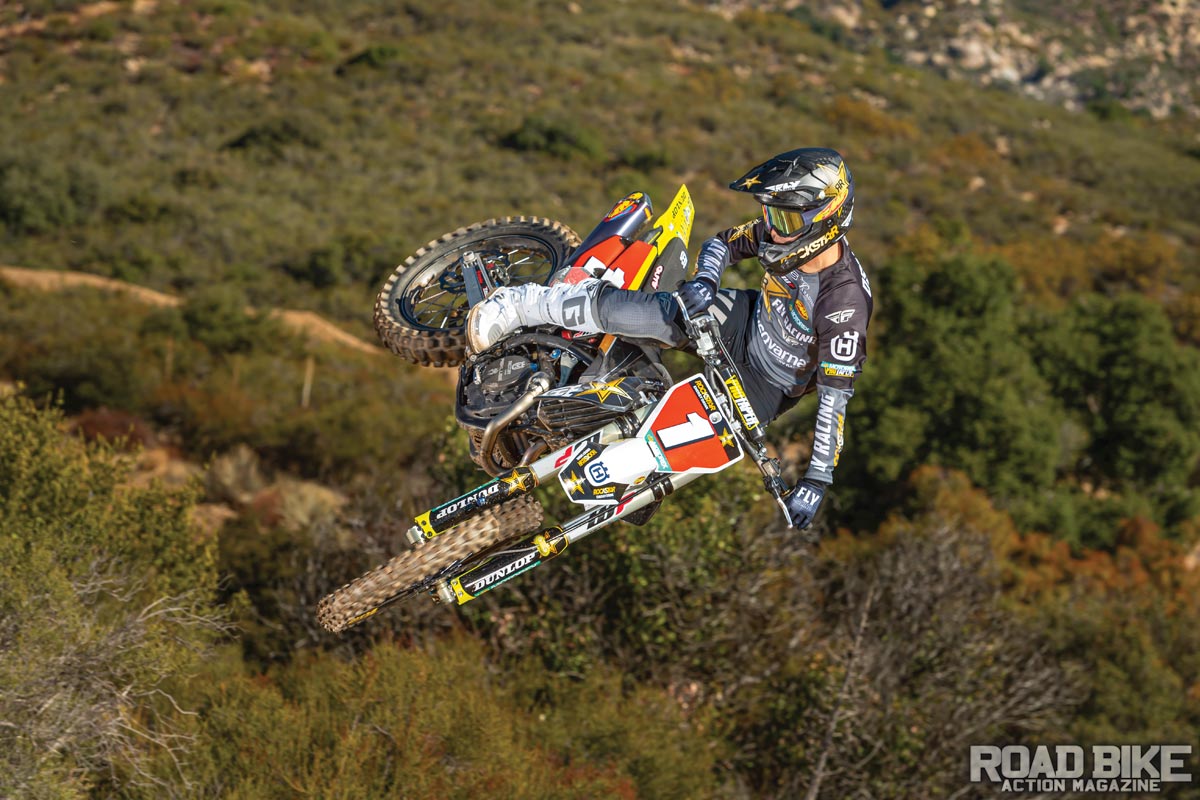 Cycling and motocross are among two of the most physically demanding sports in the world. Motocross racers navigate complex obstacles on a closed-circuit dirt course as fast as possible in a head-to-head racing format. Cyclists push their aerobic and mental fitness to the limits of exhaustion during stage races like the Tour de France. To be successful in either, aerobic fitness is critical.

Ever since the 1980s, when American champions like David Bailey, Jeff Ward and Johnny O’Mara pioneered incorporating cycling into their motocross training programs, cycling has been a training staple for up-and-coming motocross riders. What they found with cycling was an ability to increase their aerobic fitness which brought a significant advantage over their competitors.

Today, bicycles remain a training requirement for just about every pro motocross racer. In fact, many motocross trainers have professional cycling backgrounds and use cycling to build fitness in some of the most successful motocross athletes like Zach Osborne, Ryan Dungey, Eli Tomac and Marvin Musquin. Of them all, former mountain bike world champion (and 7-Eleven rider) John Tomac has incorporated cycling into his son Eli’s training program. The result? Eli Tomac is now recognized as one of the world’s greatest champions.

Not only is cycling excellent for maintaining cardiovascular fitness which is vital for racing motorcycles, but also ideal as it allows riders to mix up their training. For throttle-twisters, cycling is also favored for being a low-impact method to recover from the typical knee and ankle injuries that many motocross racers experience.

Motocross racers are at the top end of their aerobic capacity for 30-plus minutes multiple times a day. Every muscle is engaged—arms, legs, torso, back—and nothing gets a rest. Average heart rates are often above 180 beats per minute the entire time. It is a fine balance to not push the body over the edge, fading or even to total fatigue.

Just as with cycling, the trick for motocross riders is to start strong but not exert so much energy that they fade through the race because they’ve gone past the point of no return. Handling a heavy (240-pound) motocross bike involves a lot of upper-body strength as the bike’s inertia just keeps moving in every direction. When a motocross bike is going in the right direction and your technique is on point, you’re okay. But, once you change direction or suddenly jump on the brakes, the bike wants to keep moving, and that’s where the strength and aerobic components come into play.

In bicycle racing, the average heart rate is much lower. There are periods where cycling is easy and heart rate is low. For example, a rider who is sheltered from the wind in the middle of the peloton may only have a heart rate of 90 beats per minute. But, during a sprint or climb, a rider’s heart rate may be 180 plus at the top of their aerobic ability for long periods of time. In cycling, it is mostly the legs and the lungs doing the work. The real suffering comes when your heart rate reaches its max and you have to exert yourself more to maintain the desired pace. 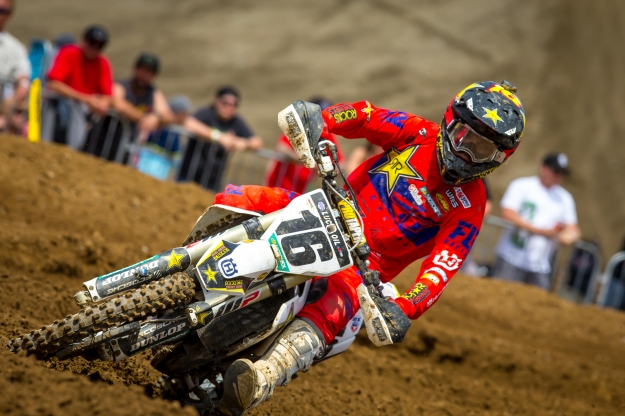 To find out more about the intersection of fitness between cycling and motocross, we sat down with AMA motocross champion and factory Rockstar/Husqvarna team rider Zach Osborne to compare his training regimen and aerobic fitness numbers to that of an average pro cyclist.

Zach Osborne is a multi-time AMA champion who has ridden motorcycles and bicycles his entire life. Amid the high-speed demands of his pro motocross career that included countless days of testing and travel, cycling, he says, helps bring him much-needed balance in life. He has always been a cycling aficionado, and like most moto riders, he has always had the latest technology when it comes to his bicycles and gear. As much as Zach relies on cycling as a training tool, he also just enjoys riding a bicycle for the pleasure of riding.

A decade ago, Zach was an up-and-coming prodigy in motocross, and he always knew that he needed to ride bicycles for training. For him, bicycles meant success in motocross. One of Zach’s first experiences riding a bicycle came when he was 13 years old and participating in a practice criterium along with fellow motocross rider Mike Brown. He remembers being so out of shape that Mike had to push him from behind to be able to stay with the
other riders.

As compared to when he first started, Zach’s cycling routine has changed dramatically. Zach credits his ability to dig deep and suffer in a motocross race to riding and racing a bicycle, and says that cycling helps him mentally to perform the hard efforts, which gives him the ability to dig deeper on the motorcycle.

After years of doing intervals on bicycles, the ability to suffer transferred to his motorcycle racing. Like many cyclists, he learned to enjoy the suffering, and this was what helped him earn his AMA motocross and Supercross titles. Nowadays, Zach mostly finds himself riding in Zone 2 and not so much high intensity.

STACKING UP TO CYCLISTS

It turns out that some of the best motocross athletes have aerobic capabilities similar to high-level cyclists. The effort motocross riders need to exert is about the same as cycling a 20-kilometer flat out. How do
the aerobic thresholds compare between a cyclist and a professional motocross racer?

Heart Rate
During a 20-plus-minute Supercross race, Zach’s heart rate is usually running at 180 to 190 beats per minute. During a 30-plus-minute outdoor motocross race, bpm depending on how hard and long he is pushing. The best comparison of a cycling event that resembles a motocross race is the time trial. Cyclists often maintain heart rates into the 170s and 180s. Anything above that and they risk terminal fatigue.

Motocross and cycling are remarkably similar when it comes to maintaining a high-intensity effort. It takes a tremendous amount of mental effort to maintain a high intensity on both a bicycle and a motorcycle. This is where the abilities of the two sports come together.

Lactate Accumulation
Lactate accumulation is a measure of how hard the muscles are working at a certain effort. Motocross racers regularly produce maximal lactate levels at the end of a race. Cyclists produce a maximal lactate level at the end of a huge effort, like a final sprint or climb. The difference being that cyclists usually must recover and keep racing after a maximal effort, whereas the race is over after 20 or 30 minutes for a motocross racer. Zach has produced lactate levels of 10 to 20 after a motocross race, which is the same as a maximal effort on a bicycle.

IN ZACH’S OWN WORDS

RBA: How do you use a bicycle in your current training program?

Zach Osborne: My base of fitness is not anywhere near what it is today, and it took years of cycling and riding motorcycles to get to where I am at now. In my early days of cycling, I remember pushing very hard on the bicycle as my pain threshold was not very high. After years of doing intervals on bicycles, this finally transferred to motorcycle racing, and I’m able to dig so much deeper now.

I don’t think I would have the ability to dig as deep as I do today on the motorcycle without the efforts I put in on the bicycle. Nowadays, I ride two to three times a week and mostly in zone 2 and not quite as high intensity. I would say most of my intensity nowadays is on the motorcycle. Today, I just really enjoy my time riding outside away from motocross track and getting away from it all. Being outside on a bicycle is very relaxing to me. There is no doubt cycling has helped me get to where
I am now.

RBA: What advice would you give to up-and-coming riders?

ZO: It takes many years as an amateur to build your aerobic base, and each year it gets a little better. As a professional motocross racer, you have to put in enough time on the motocross bike to be able to dig deeper. Incorporating bicycle training for the purpose of motocross racing is a fine balance. It is possible to train too much on the bicycle and then not have enough on the motorcycle when you really need it. So, it always comes down to finding the balance between doing too much cycling versus too much motocross, and this is an individual level for each person and where their fitness lies.

ZO: I had suffered a wrist injury, which forced me to miss the San Diego Supercross. So, instead of going to the stadium, I went to the Boulevard Road Race in San Diego. I signed up as a junior with a Paul Tracy cycling kit and totally surprised myself by placing second overall. This was a climbing finish, and I am by no means a pure climber. I conserved energy, went with the right breaks, and managed to get away with the eventual winner and lost in a sprint. I was over the moon!

RBA: And now you’re making your own cycling kits?

ZO: Yes, this is something I’ve always dreamed of doing. I’ve been working with Angeles Creative as the one designing the kits, so I have worked with him to design my own kit, and it should be out soon. Currently, I’m sponsored by Specialized, and we are fortunate that they have the motocross sponsorship. I really like their bikes and enjoy going to some of the events. One of my best memories of riding with a pro tour rider was with Peter Sagan in California. I just remember his bike skills were crazy good, even if it was just a short ride.

I have always loved cycling, and I hope that I will be able to cycle more. I am a cycling enthusiast, as I love all the new tech in cycling, and I make sure to watch the Grand Tours when I have time.

Zach’s 2021 Supercross season ended early following an injury from THE CRASH   but he has recovered and is planning to  defend his #1 plate in the outdoor MX series that starts in May.

To read more: Legends of The  Road

The post TRAINING TO WIN – THE MOTOCROSS AND CYCLING NEXXUS WITH ZACH OSBORNE appeared first on Road Bike Action.