THE 5 BEST GLUTE EXERCISES FOR CYCLISTS 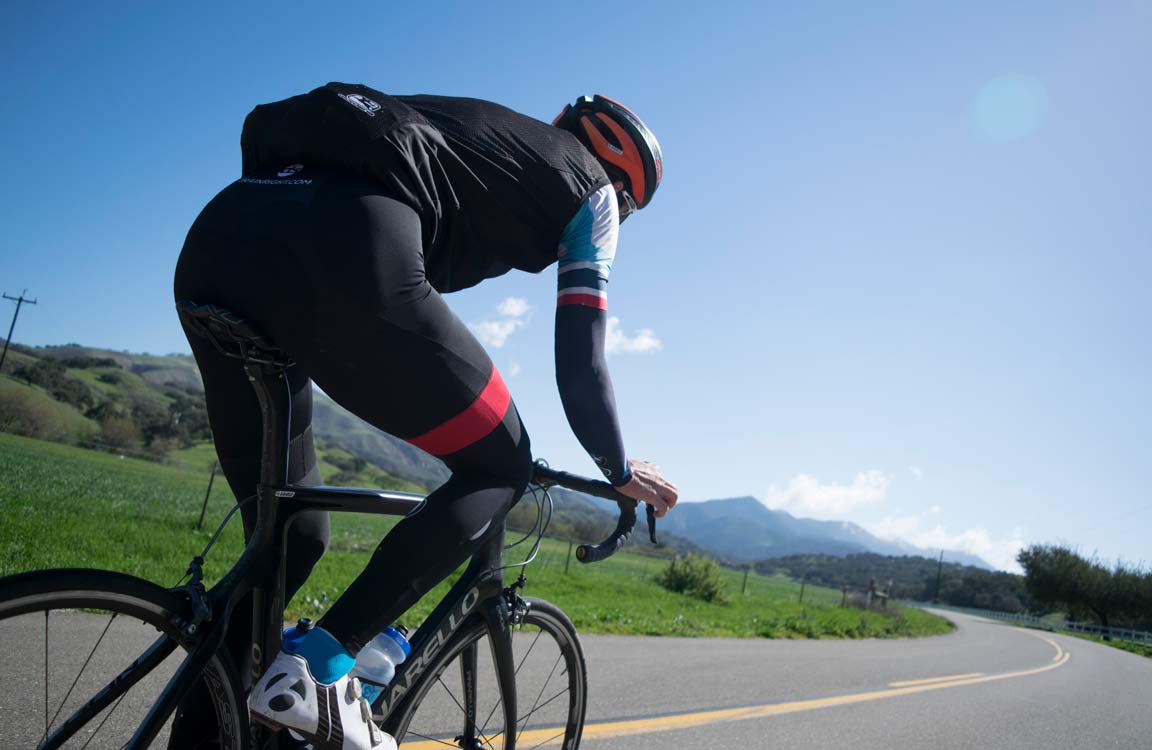 Weak gluteal muscles cause a bunch of problems for cyclists, including lower power output, knee and hip pain, and overworked quadriceps. Thankfully, there are great and simple exercises that get your glutes fired up and ready to rock.

Why Cyclists have weak glutes

You would think that a lower-body dominated exercise like cycling would be great for gluteus maximum, gluteus medius, and gluteus minimus. After all, this muscle group is primarily active in hip extension, a major component of the pedal stroke. They are also largely responsible for hip abduction, adduction, and rotation. This is where cyclists get in trouble.

Your highly repetitive pedal stroke involves a lot of hip extension and flexion, but not a lot of abduction (moving leg away from the midline), adduction (moving leg toward the midline), or rotation (turning the leg inward or outward). Cyclists who sit a lot during the day and train only (or almost only) on the bike have less robust neuromuscular connections responsible for these movements – as well as stabilization to resist these movements. You may not need more muscle mass; you may just need greater coordination from your nervous system to better use what you have.

Weak gluteal muscles can cause or be caused by poor bike fit decisions. Cyclists who have weak glutes often gravitate to a position characterized by a posterior pelvic tilt (pelvis tucked under them), lower saddle height, and more forward fore/aft position. This is more quadriceps-dominated position that can feel more powerful when you have weak or ineffective glutes, but it overworks the quadriceps and hamstrings. Cyclists who simultaneously try to maintain a relatively low or aero handlebar position also often end up with greater stress on your lumbar spine.

Saddle choice can also impact the way you use – or don’t use – your glutes. A saddle that is too narrow for your sit bones encourages a posterior pelvic tilt as you search for support and try to relieve pressure on soft tissues.

When the muscles that externally rotate a cyclist’s hips are weak, your knee can collapse toward your bike frame instead of maintaining it normal, more vertical track. Note, not all deviations from a perfectly vertical knee track are bad or need to be fixed. However, if you’re developing medial knee pain and your knee is tracking in toward the frame in a way it didn’t before, there may be a reason to address fit and/or glute activation.

Exercises to fire up your Glutes

The good news is that relatively simple exercises can have a very big impact on the effectiveness of your glutes. While heavy lifts like squats are great for developing powerful glute muscles, the more important adaptation you’re looking for initially is improved neuromuscular coordination rather than the capacity to produce maximum force.

Lay on your back with your knees bent and feet shoulder width apart, soles flat on the floor. Press your feet into the floor and squeeze your glutes to raise your hips until you form a straight diagonal line from your knees to your shoulders. Hold at the top for a few seconds and lower back down. Repeat 10 times.

Tip: Don’t raise your hips so high that you hyperextend your spine.

Advanced version: Single-Leg Glute Bridge. Perform the exact same movement with one leg extended straight. At the top of the movement your extended leg will form a straight diagonal line from your heel to your shoulder. Repeat for 10 reps on each side.

Advanced version: Drive harder with your supporting leg to jump from foot to foot instead of stepping.

Stand with a resistance band around your ankles so there is slight tension when your feet are hip width apart. Lower into a mini-squat position like you’re partway between standing and sitting in a chair, with your chest high, spine neutral, and gaze forward. Step laterally to one side about until your feet are shoulder width or slightly more than shoulder width apart. Bring your stance leg toward the step leg to prepare for the next step. Complete 10 steps in one direction first, then reverse to step the other direction.

The step up is the most basic of three movements that achieve similar objectives. You can also perform lunges and Bulgarian split squats, but each of those have greater balance challenges.

To start a step up, place your entire right foot onto a bench or step. A lower step will be easier and a good starting point. As you progress you can use a taller step. Press through your right heel as you extend your hip and knee to stand atop the step, bringing your left foot to meet your left. Return to the starting position by reversing the motion to step down. Complete 10 step ups with each leg.

Tip: Think about raising your shoulders and chest up as you perform the step up. This can keep you from leaning too far forward to generate momentum prior to the step. Focus on driving with your leg and glutes to step up.

Training Glutes on the Bike

Ideally, gluteal exercises are just part of a more comprehensive program that includes lower body, upper body, and core work. You can also target your glutes while on the bike. Seated pedaling at your normal endurance pace has resulted in the glute strength (or lack thereof) you have now. To address glutes on the bike, get out of the saddle. When you are accelerating hard out of the saddle, like a sprint or uphill surge, you are calling on your glutes for power. Similarly, you can recruit glutes by low cadence, high resistance pedaling out of the saddle.

Strong glutes are a powerful weapon for cyclists, but many riders have underdeveloped and underutilized glutes. Because the aforementioned exercises are not very stressful or fatiguing, try adding them to your pre-ride warmup to prime your glutes for action on the bike.