WIRELESS FOR THE MASSES – WIRELESS SHIFTING STARTING AT $1190 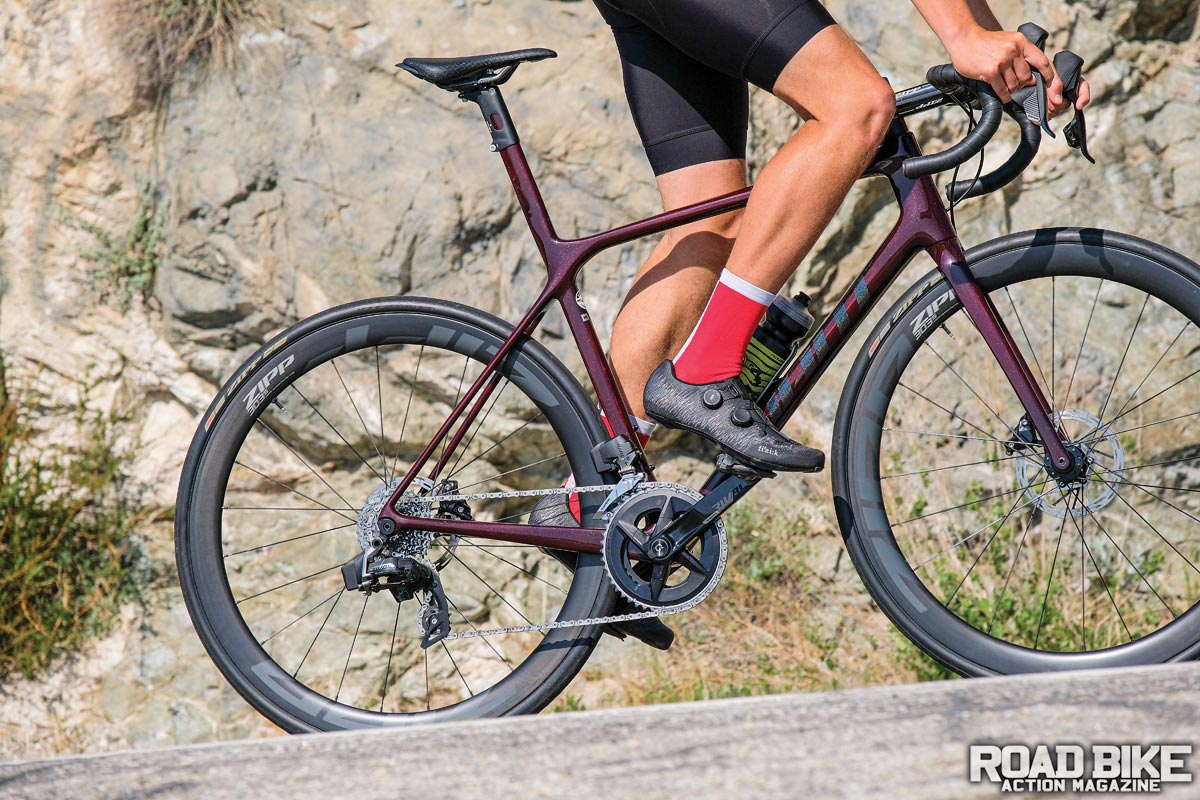 After the release of SRAM’s flagship Red eTap AXS wireless drivetrain in 2019, the Chicago-based brand released the mid-level-Force AXS drivetrain. For 2021, instead of developing an even more advanced drivetrain, SRAM continued to innovate further down their product line with the release of their wireless 12-speed Rival groupset.

Rival has traditionally been SRAM’s entry-level drivetrain, comparable to Shimano’s 105 parts. But, SRAM has now elevated the entry-level series to a new league with the latest shifting tech the brand has to offer. Designed to benefit the enthusiast cyclist rather than the pro, SRAM engineered the drivetrain to be more affordable with the trade-off being a few hundred extra grams. We’ll break down what’s new and what’s not, but there’s a Rival-stamped component for nearly everything except the rotors.

While the new bits of Rival AXS might seem to be of importance, we’d be lying if we said it’s all that matters. SRAM grandfathered most of the critical parts of the previous AXS groups into Rival. Functionality-wise, the motors, batteries and small bits remain the same as what’s on the upper-end Red and Force groups. The shift logic is the same—tap the right button for harder gears, left for easier gears and both buttons to shift the front. This also means that there is cross-compatibility across the entire AXS system, as each part can be programmed with parts outside of their given gruppo.

Instead of paying the $3600 premium for Red eTap AXS or $2700 for Force AXS, $1420 will get you a Rival AXS 2x setup with wireless shifting that is just as capable. Given its wireless nature, if a component needs to be replaced, a Rival part could be used in an otherwise fully Red or Force system and vice versa. In the current market where any part can be hard to come by, this is a major advantage.

SRAM’s AXS app that allows riders to analyze their shift metrics, monitor battery life and customize shift controls through the app is compatible with Rival as well. AXS allows for two optional auto shift modes—Sequential (actuates the front derailleur) and Compensating (actuates the rear derailleur). While both enhanced shift modes are programmed with the phone app, they can be deactivated to return to the neutral mode via small toggle buttons located on the inside of each shift lever. The AXS app is necessary to connect to for wireless firmware updates. But, if preferred, you could never open the app, and the system will work just fine.

Try as they might, SRAM couldn’t fit all of the perks of wireless shifting into the Rival package. Ports for shifter buttons were excluded, allowing the shifter profile to be updated in a couple of different ways. Aside from its black-out aesthetic, the top of the shifter hood has been angled downward and provides a more ergonomic position to place your thumbs for a narrower grip. It’s a welcome change from the Red- and Force-level shifters that have been one of the bulkiest road bike shifters which makes them harder to handle. 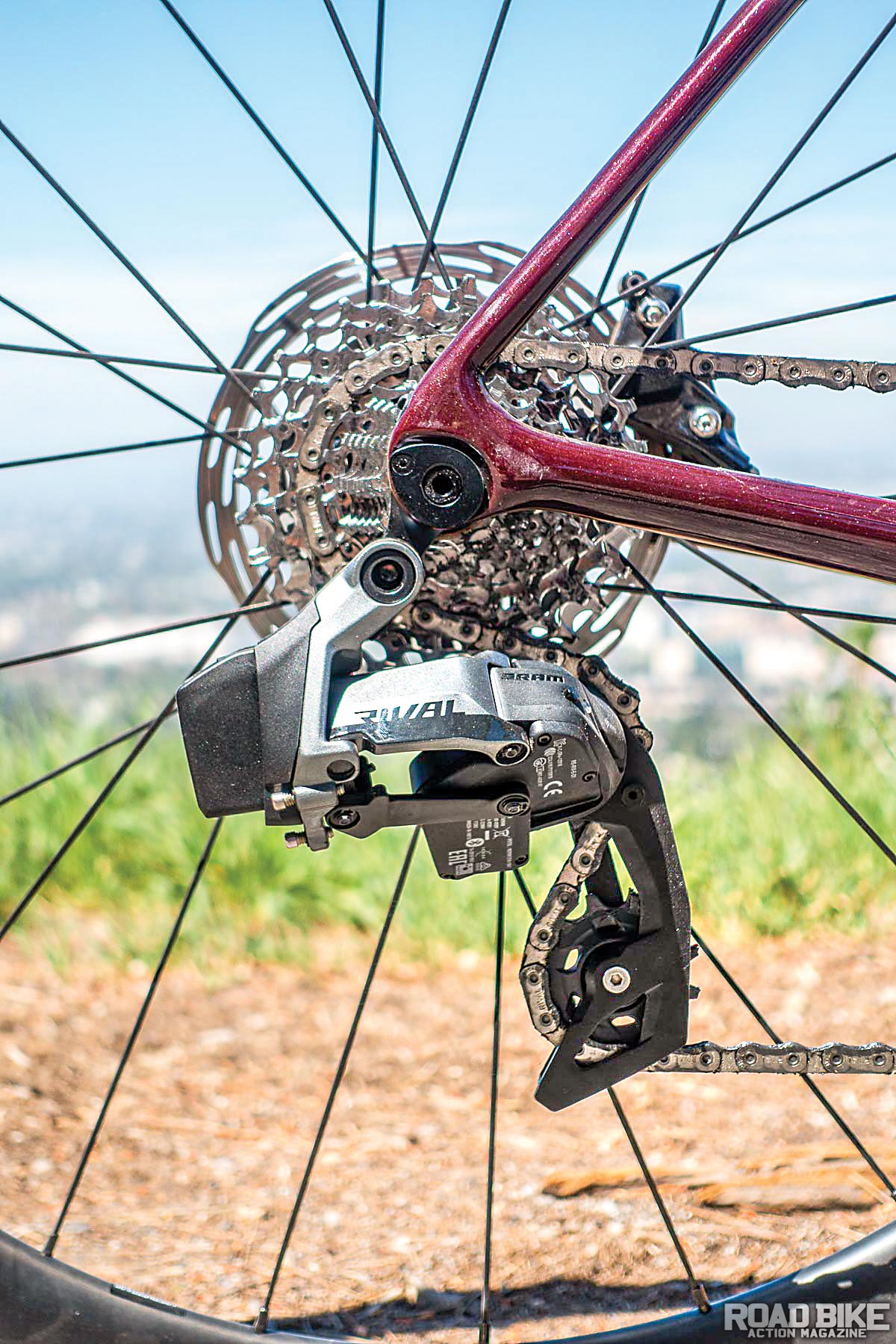 The shift paddle design has changed for the better as well, though it’s less noticeable at first glance. The paddle has been extended, giving it a larger contact patch to make a shift. SRAM changed up the texture of the paddle, too, giving it a ridged design rather than the diamond pattern on the original AXS shifters.

SRAM claimed the ergonomic changes to the shifter would not occur in the upper-level groups any time soon. Since there is no remote shift-button support or contact point adjustment offered for Rival, the shape was able to be minimized. But, the new grip position makes a strong case for them to implement a version of the design in the future.

SRAM continues to use its downsized chainrings, which rely on a 13-tooth delta and a 10-tooth cog in the rear for top speed. SRAM’s combo maintains a massive range that maxes out with a 36-tooth easy gear on the cassette. In order to accommodate the 10-tooth cog, an XDR hub body
is required.

The three most popular 2x chainring options from the prior AXS groups are available in a Rival spec. The 48/35, 46/33 alloy chainrings are offered, as well as gravel-oriented Wide 43/30 chainrings and 1x 38, 40 and 42 tooth chainrings with the SRAM Wide spindle. SRAM updated the aesthetic and paired the chainrings with black alloy cranks which bear the Rival stamp. 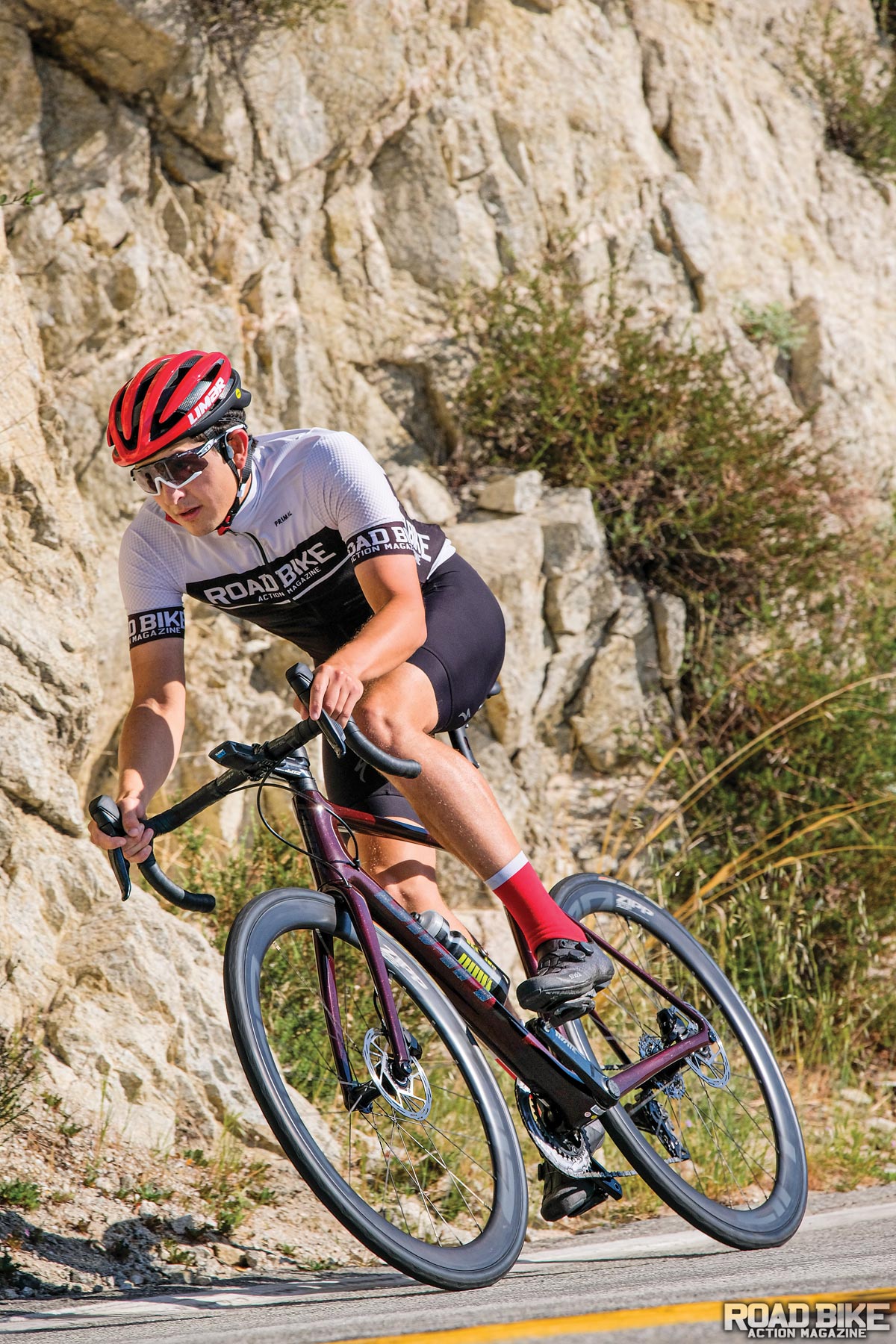 A silver, steel 10-30 cassette joins the AXS family under the Rival name alongside a 10-36 cassette. As expected, all other AXS road cassettes between 10-28 and 10-36 cogs are compatible with the new Rival rear derailleur, meaning Rival components are even compatible with the SRAM AXS Wide tech, too. Even SRAM’s MTB AXS derailleur is compatible with Rival to make a mullet (1×10-50) build possible.

The batteries of the drivetrain are the same used for the previous system, with the benefit of not only being detachable for easy charging, but each can be swapped between front and rear derailleurs. SRAM says that depending how much you ride and shift, the coin-cell batteries in the shifters should last about two years.

All of the Rival components shift with the original flat-top 12-speed chain, but SRAM released a Rival-branded chain that lacks the high level of chrome plating that is used in the Red- and Force-level chains, which presumably relates to a faster wear rate.

POWER TO THE MASSES

The most impressive upgrade to the Rival parts comes in the form of a single-sided, spindle-based Quarq power meter option. For an additional $250, riders can track their output from their left-side crank with a claimed accuracy of +/-3 percent with Quarq’s DUB PWR unit. The power meter will add on to either the 1x or 2x Rival cranksets. Since it’s single-sided, adding the unit is fairly simple—just order the proper spindle length to accommodate standard AXS or Wide gearing. Since Red and Force power meters are spider-based, the Dub unit cannot be added to those cranks, but it can be added to any Rival crankset.

Like other single-sided power meters, watts here are measured only by the output on the left leg and doubled to calculate the estimated total power. Given that the price is substantially lower than the competitors’ versions, this is a solid option for anyone that is debating whether or not the money spent on a power meter will be worth it. It is ANT+- and Bluetooth-compatible, allowing for connectivity to nearly every modern head unit and app.

Rival AXS is heavy. How heavy? How about nearly a pound and a half heavier than Red AXS. Rival’s 3155-gram claimed weight is significant on paper, and the weight weenies among us have likely already lost interest. But, recalling SRAM’s goal of appealing to the enthusiast rather than the pro, while the weight gains are indeed large, happily, they remain less significant when both the price and shift performance are considered.

Most of the additional weight can be found in the alloy cranks. Nearly 300 grams heavier than Red and 110 grams heavier than the Force, Rival’s crankset is made of reinforced, solid-forged aluminum rather than a carbon composite. This simplifies production and significantly cuts costs. The cassette, rear derailleur and connected shift/brake system are each about 100 grams heavier than their Red counterparts. Compared to mechanical hydro-disc Shimano 105, Rival packs on nearly 2 more pounds.

Our test rig was Giant’s 2021 TCR Advanced SL, which is a performance-oriented frame that is typically adorned with higher-end drivetrains. Along with the Rival parts, we added Zipp’s mid-depth 303 S carbon wheels to get us rolling. Thanks to its fairly standard geometry, the TCR serves as a proper test frame that didn’t distract from the new drivetrain’s performance.

Our frame was built with a 46/33 crankset with power and a 10-36 cassette. Rival’s top-end 46×10 gearing is similar to compact, 50×11 gearing from Shimano, while the Rival’s 33×36 gear is significantly easier than the typical 34×32 gearing Shimano currently offers. We think for most recreational riders this wide range gives SRAM a distinct advantage in terms of relevant use of the gears. The easier gearing just makes sense for more riders. The wider gear range allows riders to be able to handle a wider range of terrain.

“We’ve been fans of mid-compact 2x and 1x chainrings for the express purpose of minimizing the need for making front shifts for years, it just makes riding simpler.”

For the price, the DUB PWR unit is a welcome feature. The single-sided power meter performed as well in races as it did on long, sustained climbs. We noticed our Wahoo Elemnt would continue to display our previous power reading in a few instances when we stopped pedaling, but we expect a future firmware update to address this issue. Readings while pedaling were accurate and quick to respond to inputs.

What we noticed most was how rarely we had to shift out of the front chainring. For the most part, the 46-tooth chainring was used with the middle and upper cogs of the rear cassette. But, on punchy rollers and long climbs, shifting into the small chainring provided more opportunities for us to feel fresh by keeping our cadence high before meeting our limits.

We’ve been fans of mid-compact 2x and 1x chainrings for the express purpose of minimizing the need for making front shifts for years. Not only do they make riding simpler, but also—gasp!—pedaling efforts easier. And given that most of us are not WorldTour riders, the compact rings have reminded us that we don’t need a 53t chainring.

The utility and added range of the 46/33 chainring put SRAM in a league of its own with the AXS system. Most important, SRAM is continuing down the road of changing the drivetrain market for the better by making
wireless shifting available at a lower price.

The post WIRELESS FOR THE MASSES – WIRELESS SHIFTING STARTING AT $1190 appeared first on Road Bike Action.